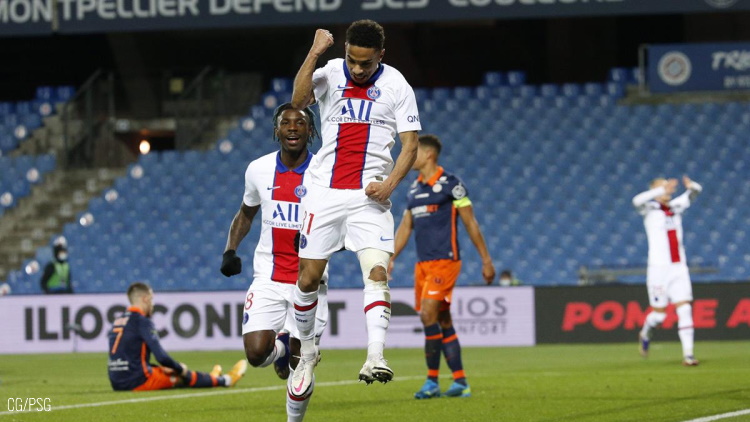 Colin Dagba had a very special night in Montpellier on the occasion of the Paris victory (3-1). He certainly scored his first goal in his red and blue colors, but before that, the international hopes had experienced many difficulties in the game. Back in figures on this paradoxical night from the Paris side.

Colin Dagba will certainly remember this December 5, 2020 for a long time. And for good reasons. He scored his first goal at Ligue 1 in La Mosson, and even his very first professional goal with PSG. But this night could have been a milestone for all other reasons, much worse. Indeed, until the goal of the 33th a minute, the young Parisian side (22 years old) had lost almost everything.

In scoring his goal, he had lost 10 of the 24 balls he had played so far. A terrible 42% ratio of missing balloons to maximize “Heads in the air” of his partners (Neymar is shooting this season at 29% for example).

Substituted at 64th, Dagba ended the game with 13 losses out of the 40 played. So he returned to the opponent a third of the balls he touched. At this young average (22.4 years old) and an unprecedented defense at 5, he was not the least inexperienced, from the top of his 38 Ligue 1 games (against 13 in Bakker and 2 in Pembélé). Nonetheless, the technical blunders chained throughout this first half: cushioned chests were lost, transferred to opponent, rough checks …

Beyond his lost balls, all his statistical indicators testify to a tough fight: only 69% of successful passes (vs. 92% in career), one successful defensive posture (interception), no duel after ‘ to win, a yellow card. The worst part is that his technical failures have completely destroyed the little confidence he should have had since he took so few initiatives: 23 of his 33 passes were made and he didn’t. tried no dribbling.

And yet, he got this lovely inspiration after half an hour of play: seeing Di Maria overrun on the left side, he has the good reflex to pass in front of Ristic and the gesture just to fool Omlin. Hopefully this goal will benefit him and he regains some confidence.

Not the only one to be assertive and the hard

This paradox of a determined player despite a larger than average night in the game also does not apply to Colin Dagba. The other two evening scorers had many difficulties in the game. For example, Kean only touched 29 balls and lost 11. He only managed 71% of his passes and won 3. duels at 9, but he scored a new goal in particular (his 7th with PSG) and spirits thanks to his brilliant strike of the 77th.

Mbappé, came to play in the 78th, meanwhile, missed almost everything (won 0 duels out of the 3 contested, lost 5 balls out of the 13 played) but was present to try Kurzawa in the net (91th). Two of the three assertive assistants of the Paris side had an otherwise complicated night: a 3 fault writer, Kurzawa came close to being expelled and often had difficulty defending, and Di Maria lost 30% of the those balls touched (21 of 69).

What should we draw from it? Quite simply, one should not be satisfied with the counting of the goals and assists in analyzing a player’s performance, but, until proven otherwise, it is the goals registered that secure the games and titles …