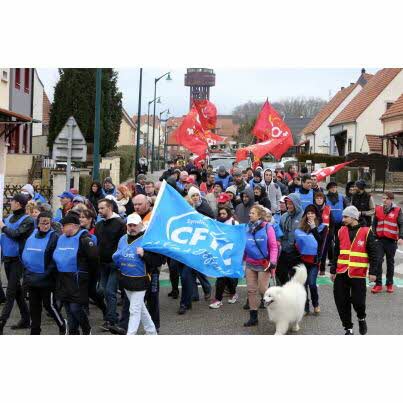 Workers at Neuhauser's industrial bakery are just a few months behind in Folschviller. After the first PSE (Job Protection Scheme) in 2017, which had seen 110 jobs removed – 259 were originally published – dark hours are back. The announcement was made by general manager Neuhauser, Marc Auclair, Monday afternoon: the Furst 1 site will close. Remove 185 jobs in a basin that have already been hit by unemployment. The layoffs will not start as early as March 31, 2019.

Production was transferred to Brittany

"Closing Furst 1 suggests closing Furst 2 in less than a year," Christian fears Porta, CGT, identifying the methods of the Neuhauser Soufflet group. "On October 30, an investment of 1.2 million euros was announced on Furst 1. Ultimately, fifteen days later, we learn that our production will be transferred to Britain and 185 people will lose their employment."

Hope was showing fast though the unions sounded the alarm for the decline of the company's working conditions in recent months. In April, during a strike that followed the announcement of new budget cuts including the abolition of acting positions, Cengétiste was already saying his fears: "The Furst has 1 production lines, only two and a half times."

Of course, there are 201 job cuts across the group. Five at Saint-Quentin (Aisne) and eleven at Seyne-sur-Mer (Var). Only winner of the case: Br-Sous-Montfort site in Brittany, where 41 jobs should be created.

After contacting us, managers continued to be unlikely on Monday. The workers themselves were quickly moved. After announcing the managers, Furst 1 workers gave the best work to get on strike. The unions have already invited all employees to meet on Tuesday afternoons.

Last month, the leading head of the plant, Alfred Neuhauser, died. His last fight? In 2014, when Neuhauser joined the Soufflet group, he set the seat in Moselle, at his own home in Folschviller.