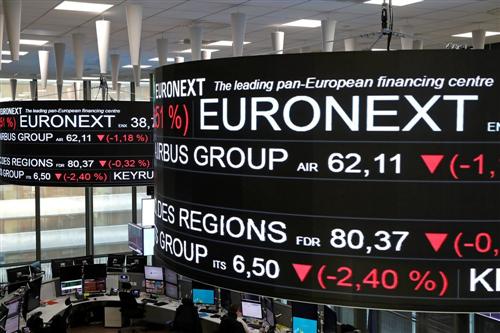 Investor nervousness fell back after Tuesday in Paris square. y CAC40, which had stumbled heavily over the beginning of the week, had restored 0.5% to 5,385 points to close it, in a moderate transaction volume of 3.19 billion euros. The flow of buyers was driven by the US decision to temporarily lift some of the restrictions on the Chinese Huawei telecommunications. The US Department of Commerce has returned some of the sanctions imposed last week on Huawei by allowing, temporarily, until 19 August, to keep its existing networks and provide software updates for its phones.
This rebound in the case of Huawei is even more important for stakeholders that the relationship between Chinese and US administration has become a strong symbol in the markets, or even a sign of the state of tensions between the US and Chinese. . Last night's decision is therefore seen as a sign of the White House charge against Beijing. But investors are still vigilant as Huawei remains on a black list, which forced him to obtain authorization from the US to purchase electronic parts and components of US companies.
More generally, the possibility of settling the economic conflict between the two major power still seems far. Observers have high hopes for the proposed meeting between Donald Trump and his Chinese counterpart at the end of next month on the sides of the G20 summit in Osaka.

In April, resale of homes in the United States fell 0.4% to 5.19 million units annually, according to statistics released on Tuesday by the National Association of Realtors (NAR), the main federation of real estate agents. This decline has taken course economists with an average increase of 2.7% to 5.35 million units.

Continuing trade tensions have broken the momentum of global economic growth, which is expected to remain weak this year, the OECD says, calls on governments to implement more collaborative policies urgently.

* Alstom (+ 1.5% to 39.63 euro) have benefited from a very good contract. The railway group won a call for tenders for 27 trains powered by fuel cell from fahma, a subsidiary of RMV. Contract worth around 500 million euros in general, including 360 ME for Alstom. The French group will provide Coradia iLint vehicles in accordance with the revised timetable in 2022. In addition to trains, the order also includes hydrogen supply, maintenance and the provision of surplus capacity for the 25 years. next.

* STMicroelectronics resumed 4.2% to 14.76 euros, prompted by the break given by the US administration to Huawei. Responding to the collapse of the micro-electronics component manufacturer on Monday, Bryan Garnier reiterated his buying advice with a price target of 19.5 euros.

* BNP Paribas it won 0.8% to 45 euros. The news on the trilolor bank is looking for a boost from Goldman Sachs who have revalued the record from 67 to 70 euros confirming its "purchase" recommendation.

* Engie (+ 0.2% to 12.83 euro) strengthens in offshore wind by creating a joint venture managed jointly 50/50 with SDP. The new entity will be EDP's unique investment instrument, through its subsidiary EDP Renewables (EDPR), and Engie for developing offshore wind power in the world. This entity will be one of the top 5 global players in the field, bringing together industry expertise and the ability to develop both companies.

* bioMérieux earned 0.9% to 73.15 euros. MainFirst began tracking with the view 's performance better than &; on the stock with a target price of € 82.

* Airbus Group (-0.7% to 118.26 euros) limits the production of its A321 to two assembly lines in order to avoid that technical delays hinder the production of other models. This decision means that some A321 customers will receive their helicopter later than expected, subject to discussions, a group leader said. However, it does not question the objective of distributing the aircraft's suppliers, set between 880 and 890 aircraft this year.

* Plastivaloire logically plummeted 6.3% to 7.72 euros. Yesterday, the group reduced its 2018-2019 full year projections, at the same time as it published its second quarter activity figures. The plasterer now expects a 2018/2019 turnover of 730 million Euros instead of 745 million Euros. In terms of the EBITDA boundary, it should be around 10% rather than 11% as previously expected.

* JC Decaux has been a third consecutive session in the red, down 1.8% to 25.74 euros. The world leader in outdoor advertising is punished by a note from Citigroup who has degraded the value of his purchase; to neutral.

* Boiron 4.8% fell to 39.5 euros but eventually declined its decline to 4% yesterday after resuming listing following fear of homeopathic medicines derogation. The group confirmed yesterday that it had received a first opinion from the High Health Authority (HAS) Transparency Commission announcing a recommendation against continued homeopathic health insurance treatment, currently 30%.