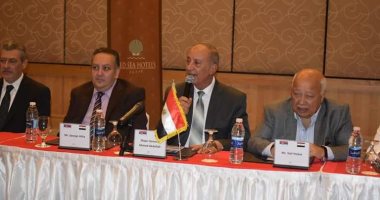 On Friday, the Red Sea Governor General Ahmed Abdullah held a meeting to sign the Egyptian Serbian Business Council agreement at a tourist destination at Marsa Alam, in the presence of Dragan Palma, the Serbian Senate President.

The Governor of the Red Sea welcomed President of the Senate of Serbia Dragan Palma, thanking him again for arriving in Egypt and the Red Sea quickly to sign the Business Council agreement.

The Governor also thanked the Mayor of Yagodina Ali and their accompanying delegation, wishing them a good time at the Red Sea Management Service throughout the stay.

The governor also confirmed that it is agreed to set the timing of meetings in Egypt or Serbia at the level of business advice or the level specified in the twinning agreement signed in Yagodina to improve the bilateral relations between the Marsi Alam cities and Yagodina, Between Egypt and Serbia.

The Red Sea governor said there was another formal meeting in Hurghada between business people in Hurghada and business people in the presence of some officials from the Egyptian government coming from Cairo specifically to meet Dragan Palma, the President of the Serbian Parliament and members of the delegation which accompanies it.

For his part, the President of the Parliamentary Parliament emphasized the need to strengthen Egyptian-Egyptian relations, especially in the Marsi Alam city in the Red Sea, by asking the Turkish tourists to increase the number of tourists from Yagudina to & Red Sea # 39; and work on establishing Egyptian-Serbian companies in both countries.

The President of the Serbia Senedd also thanked the Red Sea Governor for the proposal to establish business advice between Egyptian and Serbian businesses, which will be of great importance to Serbia and will have a strong return, emphasizing the need to agree the necessary needs necessary between the two countries.

Palma added that more than 100 businesses will be present in the business council, which will have great experience in all areas in many European countries, to become a business council with great links worthy of two large countries such as Egypt and Serbia.

A workshop was also organized to promote trade exchange and joint investment opportunities between the two countries in the presence of Abdallah's First Minister, Red Sea Governor and Dragan Palma, President of the Serbian Senate.

The governor emphasized during the workshop the need to discuss all the opportunities for expansion, partnership and investment discussed by the business of Serbia

He also referred to the Egyptian business participating in the workshop to focus on the essential projects needed on the side of Egypt.

Abdullah said that the main objective of this workshop is to encourage and facilitate measures aimed at promoting and developing trade and investment exchange and cooperation between the two countries.

At the end of the workshop, the Red Sea Governor emphasized that this workshop was a starting point for the beginning of hard work and investment between Egyptian businesses and their Serbian counterparts to create serious investment opportunities in both countries, noting that this co-operation falls under the umbrella of the twinning agreement signed in the city of Yagudina this month Past.