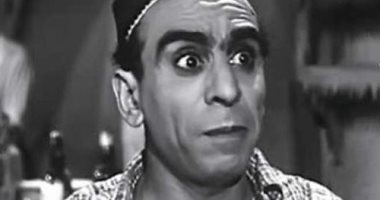 He has a distinctive face, voice, and performance that made millions remember him and know his roles even if they didn’t know his name. He is a young man in the movie Antar, the villain in the movie Between Sky and Earth, Kouch in the movie Taxi Love and Burqa Afandi in the movie A Dozen Handkerchiefs, and the Secret Secretary for the Lawyer, and others Solicitor. Hundreds of cinematic and theatrical roles, in which the artist Said Abu Bakr, whose birthday was today born, said at his birth on November 20, 1913.

Born in Tanta, the Government of Gambia, artist Saeed Abu Bakr was educated at Tanta Primary School, then Tanta High School, and received his bachelor’s in 1933.

His artistic talents appeared at an early age, so he joined the cast, and participated in many plays in the school theater, the most famous of which was Louis IX.

He traveled to Cairo and worked for the Ramses Department for a monthly wage of 3 lbs, but left the band and traveled to Suez in search of a better job opportunity, so he worked as a warehousekeeper at the municipal council in Suez from 1933 to 1936.

He returned again to Cairo and joined Ansar Acting and Cinema, Fatima Rushdie, Malak, and Fouad al-Jazairli. With the inauguration of Zaki Tulaimat of the Institute of Theater in 1945, Saeed Abu Bakr was one of the first to enroll in the institute and gained the admiration of Zura Tulaimat.

Saeed Abu Bakr worked as an inspector in the school theater in addition to his membership as an actor in the modern theater competition and in the early fifties directed a number of plays, including the play: “Fund of the World, Baba Wants to Get Married, Hawa, People Above ”, and acted in several plays, including:“ The Miser, the Nail Juha, delusional, and others. “

With the start of the television groups, Said Abu Bakr was nominated as director of the comedy theater in 1963, and subsequently director of the singing-song dance company and presented a large number of plays, including: “Bint Bahri, Hamdan and Bahana, Cairo in a thousand years. “

Abu Bakr went to the cinema after he became accustomed to director Muhammad Karim and his first role in the cinema was in the 1940 film Happy Day and The White Rose directed by Muhammad Karim, and the only film he took part in the star was “The Seven Effects”

The artist Said Abu Bakr had a love affair with artist Magda Al-Sabahi at the start of their artistic career and sermons, but the engagement project with husband was not completed, and then remained unmarried until his death.

Saeed Abu Bakr enjoyed the love and friendship of most art stars and giants, as he was noted for his lightness, kindness and broad culture, but he suffered from heart disease and suffered with illness for years until he decided to travel to London to have heart surgery.

While traveling, the plane was unable to land at London airport due to fog condensation, so she continued her journey to landing at the Scottish airport, then returned to London airport after the fog subsided, and stayed the plane was in the air for 17 hours, when Abu Bakr suffered a serious heart attack, so the plane died and left our world. On October 16, 1971.