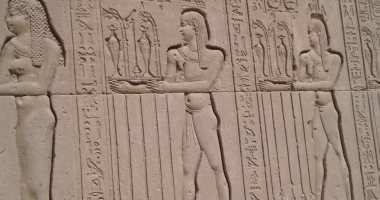 Egyptian researcher pointed out that Egyptian researcher Manal Hafez, director of the Egyptian Center of Feminist, Human and Historical Studies in the Egyptian Society for Tourism and Antiquarian Development in Luxor, knew that the ancient Egyptians knew they were among the most tolerant people in Luxor. They believed in respect for others, And hundreds of opinions and advice recorded by inscriptions and pictures of Pharaonic temples and abrasives, all of which promote the spread of human tolerance principles and values.

According to a study by the Egyptian researcher, Manal Hafez, published on the occasion of the International Day for Abolition, which ends on November 16 each year, books of wisdom and literary texts in Pharaonic Egypt contain many texts which promotes tolerance and respect for others, such as: "Do not use Violence against any person in the countryside or city … Do not agree anyone falsely .. Do not take anyone, "and that most Egyptian ancient literature has built on the morality and principles of tolerance and charity for another" If you behave friendly towards your Lord and King and # 39 , those who are less than you instead of That's health and longevity, and your Lord will punish you after death according to your actions "and" judge must judge " gentleman to give bread to the hungry "," watch your hand, stop your heart and stigmatize your lips "; and" m The heart is abolished by morality – as the master of the main member of each other member – that is the powerful master of creative creation "Texts call for tolerance and compassion about the weak.

The Egyptian Center for Humanitarian, Human and Historical Studies, the Egyptian Society for Tourism and Antiquarian Development, studied that the Egyptians linked tolerance and heart safety, and thought that the only heart was tolerant, and that the heart is central to physical and emotional life. Feelings and situations of ethics and the characteristics of ethics, the leading tolerance in terms of all those who are related to the heart, described the happy person to welcome heart, and described depression as a tough heart, and the number of terms that describe heart-related human cases to more than 300 terms, the words of Bert wisdom that call for tolerance and ethics in the world, one of oldest and nominal types of literature in ancient Egypt, and pupils in schools who are studying books of wisdom.

According to a study by Egyptian researcher Manal Hafez, the most magnificent images of ancient Egypt were revealed in text that came within the terms of peace agreement signed at 1280 BC between King Ramses II and Khato Silis of Hittites. "A duel story between the prince of Pharaoh and foreign countries, and when the Pharo wins when he defeats his foreign competitor, the voices of the forces that followed the fence continued," Kill, kill him. "But Prince Farouni Responding to the demands of the public to kill and respond to the stranger, saying: Dynoli Flowers are not broken back to flower again.

The International Day for Dissolution is held on November 16th each year. In 1996, the UN General Assembly called on Member States to observe the International Day for Tolerance on November 16 through appropriate activities aimed at educational institutions and the general public, the decision came on after the UN General Assembly announced in 1993 that the United Nations Year of Wisdom was the year 1995, on the UNESCO General Conference initiative, and since the year following the year of tolerance, 22 years ago, to the present day, the world celebrates the 16th of November International Enforcement Day.