“What have you ever created ?!” Geisler attacked Lipovská, who is the author of six publications 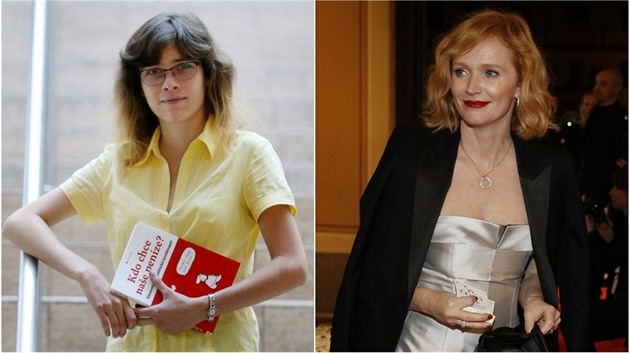 Aňa Geislerová shared the first release of the Freedom Festival on Wednesday, a civic initiative that announced the fight for the protection of Czech Television. This is to be jeopardized by the CT Board, which decided to dismiss the entire oversight commission altogether, which parliamentarians called illegal yesterday.

“Miss / Mrs. Lipovská, if I may (and I can, you are a public official), have you ever created anything? Do you have any activities that could be called beneficial? Public benefit? Are you managing something that could it be called art? Have you ever created something creative? “ Geislerová added an offensive comment to Councilor Hana Lipovská, who, especially along with Luboš Xaver Veselý, is criticized as “the source of all evil”.

But Geisler wrote this faster than he found out the facts (and, according to some, spelling rules, because many people noted the astonishing frequency of punctuation errors). Hana Lipovská is the author of six books, so she definitely created “something”.

Four of these books are economic publications: “Mathematics in Economics and Economics”, “Modern Economics”, “Who Wants Our Money?” And “Is It Worth?”. He wrote the title “To be clear” with Jana Bobošíková and is a book that maps political events and the situation on Czech Television. He also participated in the popular edition of Masaryk University volumes.

“It’s amazing what you, as an economist, pay your attention to, but with the looks, the experience and the moral attitude, it really equals those sandwiches … Watch them. And I recommend that you sometimes go to an international film festival or a TV production festival.You may realize the meaning of the word representation.But now the sandwiches are healthy and don’t let anyone have an extra cookie, “ she probably wrote, referring to Lipovská’s battle against high spending on refreshments at CT meetings. 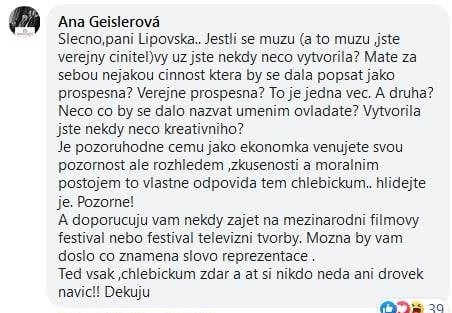 Mrs. Aňa Geislerová writes to Mrs. Hana Lipovská. I would tell the grandchildren about 2020 one day. (From that written speech, Mrs. Geisler seems to have written it in person). https://t.co/prnUHnBl6P

But the actress, who was representing at festivals, started again. As some people pointed out in the discussion under the post on Twitter, Geislerová was an actor many times in drunken movements at the Karlovy Vary International Film Festival.

We can mention, for example, a rich morning bathing in the Teplá River after celebrating Jiří Macháček’s birthday in 2010 or the party’s disgraceful departure in 2014.

Here we quote the Blesk.cz server: “In the meeting with the actors for the movie Fair Play, she did so well that her husband Zdeněk Janáček had to take her to the hotel.”

“And I recommend that you go to an international film festival sometime.” (Thank you, @ martingust38 ) Geislerová Varied under steam in broad daylight: Her husband dragged her drunk from the afternoon incident https://t.co/ZFd8rfSbU3

Suddenly Geisler became the target of harsh criticism, which in many cases poured into a barrage of insult. But the actress allegedly doesn’t mind, because it’s supposed to be proof that she’s doing her job very well.

“My loved ones, what are you writing to me about those horrible abominations? You’re proud of fighters for the ‘true truth’. From what and how you write, I feel how it all eats and how it cheats on you, how you know my life and my career. And really, it makes me so happy. Mostly, actors are tasked with arousing emotions. Good, bad, it doesn’t matter. Mostly emotions. So thanks for giving me feedback! It works. You can’t help it, you want to write to me, you obviously want to tell me how you feel. Okay. I read it. And I wish you a wonderful Christmas with Czech TV. PS I only have the foundation. Thank you, “ he said.

My dear, what are you writing those horrible abominations to me? You are proud fighters over that “true truth”. From what and how you write, I feel how the whole thing matures and how hungry you are, how you know my life and my career … and it really enthuses joy so roamed in me. We have actors tasked with arousing emotions. Well, it doesn’t matter. Especially emotions. And thanks for giving me feedback! It works. You can’t help .. you want to write to me, you obviously want to tell me how you feel .. ok. I honor it. . And I wish you a lovely Christmas with Ct.
PS Please correct me a rough guy. I only have the bookmark. Thank you ✌