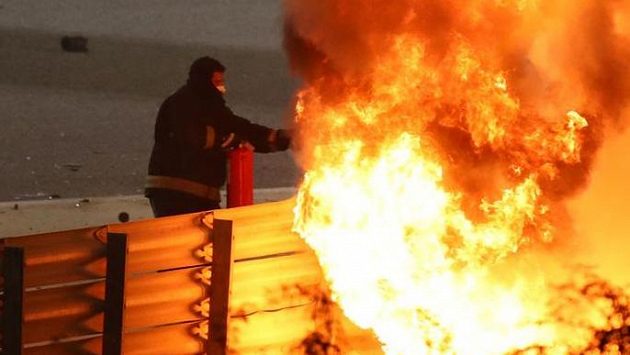 Six days after the horrific accident, after which he said he had been born for the second time, Formula 1 driver Romain Grosjean sat down in the Cockpit again. With bandages on his burnt hands, he returned to the Haas team car, which Brazilian substitute Pietro Fittipaldi will win today’s Grand Prix, and it is already clear that he will not even finish the last Grand Prix in Abu Dhabi, and was supposed to be his last in Formula 1. Burnt hands. he eventually leaves Bahrain to heal home.

“It is very sad that I will not be able to complete my last race in Abu Dhabi, but it would be too great a risk for my recovery, health and safety. I was not expecting to end my career in Formula 1. It was one of the hardest decisions of my life., but at the same time the most sensible, “says a Haas fixed pilot.

A week ago, at the Bahrain Grand Prix, he miraculously escaped after half a minute of burning formula which he fired after hitting an obstacle. He spent three days in hospital. He has been on the race track in Snadir every day since his release, and Saturday he sat in the Cockpit again during the team’s visit. He announced today that he will not say goodbye to Abu Dhabi. Even in the season finale, he will be represented by the Brazilian Pietro Fittipaldi.

“I don’t have my usual racing gloves, but sitting here again is a great feeling. I’m happy,” Grosjean wrote of the picture on his instagram. In the F1 World Championship series, he has ridden for the Haas stable for all four years since its inception and has completed 96 races in its colors. A total of 179 Grand Prix went.

He would like to say goodbye to F1 in January, at least in the form of tests. “I’ll call each team to see if anyone offers me a private test at the beginning of the year,” he said. The Mercedes master had already made it known that he would be ready to fulfill his wishes. “If we were allowed to do that and none of the stables he competed in would give him such an opportunity, we will do it,” said director Wolff. Before joining Haas, Grosjean raced for Lotus, now Renault.

Marijuana in the NBA? No problem. The games insisted there would be no test rooms