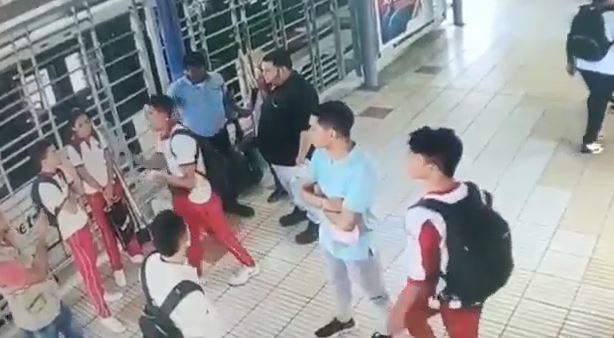 Aida Domínguez, the mother of a 17-year-old student, told EL HERALDO to be "troubled" as Transmetro's guide responded to her son and others to her classmates.

The incident was recorded at about 2:30 pm on Thursday, inside La Catedral Station, which is located in front of Plaza de la Paz, when the students were preparing to take their proper buses to go. at home, after leaving classes.

According to Dominguez's story, the event was unveiled when one of the young people tried to push into the mass transit system without canceling his ticket, but he was surprised to leave.

"My son's partner, wearing a Junior shirt, came in without paying, but they take him out and go back to pay his ticket. There he changed his mistake, but when they were inside, the ushers were involved with them, the young people answered them and there they started arguing, "said the wife.

The mother confirms that her son is a “watchman” when one of the ushers decided to record it with his mobile phone. With this in mind, "the woman said, the student told him not to record" because he had nothing to do, as he had canceled his ticket. "

Then the young man walks towards the Transmetro worker to lower his cell phone and stop him from continuing to record. That was when the employee responded by hitting the student in the face.

The man's behavior dropped a conflict with fists, kicks and wells between him, another companion of the company and the group of students. With this in mind, there was a need for a uniformed police presence, which could manage the situation.

Julieta Faillace, the mother of the young man who wore the T-shirt on Thursday 15, said he was the one who flew the entrance gate to the station, even though his son had not committed a fault, the way of acting. guidance was “not sufficient. "

"They are under age, my daughter was with her younger brother, aged 12, and other children, and she broke the guide, which is supposed to help, a strip cut on top. This caused bruises and bu & # 39 His private doctor must go to him, "said Faillace.

"We went to the Transmetro offices and the actions of the guide were justified because my son had flown. They also said, because no one liked to have their cell phone raped, then the slapping that he gave was justified. my son's partner, "he said.

The woman said her children were afraid because they had to continue using the same station to move between their home and school.

EL HERALDO consistently called the Transmetro offices to have their version of what happened with the students, but did not attend.

In bed and with the mantle open: Karol G took all the looks