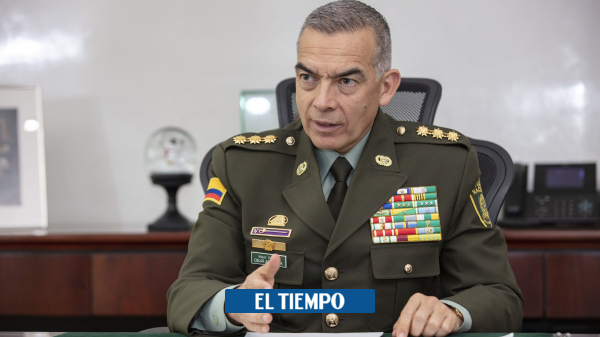 The Attorney General issued a harsh warning to the Director of Police, General Óscar Atehortua, during the disciplinary proceedings being lodged against him on four charges.

(In context: The process that came against two senior police generals).

The prosecutor in the case told the officer that he was either discharging his duties or dedicating his time to defend himself at trial for alleged irregularities in his control when building some police houses.

The Attorney General’s Office’s response was given after he quoted the continuation of the case for this Saturday, Dec. 5, and General Atehortúa stated that he could not do so because he had already planned and had to attend a Security Council. He also said that he this week attended the proceedings at the Public Administration on three additional occasions to the one originally planned.

(You may find it interesting: A new Police category will be created to benefit patrollers)

“I can’t attend on Saturday and am interested in attending (…) this was not on my agenda, I make every effort to attend all the hearings “, said the senior officer.

And he added: “With public order activities in the country, I’m not setting my agenda.”

The attorney general’s office argued that while the hearings were initially only one day a week, it is necessary for the processes to be summarized and new evidence obtained.

Identified as needed facilitate the practice of the last remaining tests.

(Also read: ‘We acted in accordance with the law’: Police on discovery in pubs)

At the insistence of General Atehortua, the prosecutor in the case replied: “I’m going to tell you something that seems strong but it’s like that, The time will come when you will either perform your functions as Director of Police or defend yourself at this trial, because it cannot be that we are delaying this and that the same audience is harming you in carrying out your functions “.

The officer pointed out: “What I am trying to do is perform my duties very well and, of course, be able to exercise my protection and they inform me two days before a hearing that it was not arrange. “

Finally, the attorney scheduled four days of hearing for next week, which created the allegation of the general’s defense brought by lawyer Marco Antonio Velilla.

(Read: Director of Police Óscar Atehortúa is heard in the Prosecutor’s Office)

The lawyer asked for procedural guarantees for his defense and the attorney said: “Isn’t it useful either?” and asked if the defense has any interest in not holding the hearings.

“The only benefit is that due process, the right to defend, the right to contradict are respected and that the usual breaks required for the protection of a person of the quality of a Police director are respected,” he said Velilla.

More than 100 ex-fighters have been forcefully displaced, Farc said

What mistakes did Fajardo, Gaviria and Ramos have in Hidroituango?

‘Technology can help bridge gaps and improve access to justice’