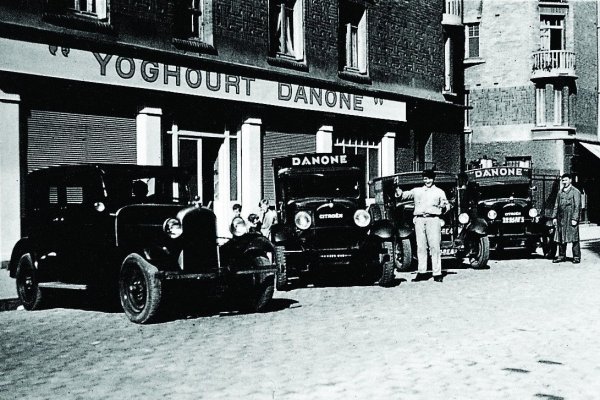 They have overcome crises and wars, some have changed their owners, but they celebrated their first hundred years as market reference brands, which continue to attract consumers.

Company life expectancy is not more than fifteen years and about 3% of family firms reach the fourth generation. So, it is not easy for society to sustain its business decade after a decade and survive over a hundred years.

In 1919 a group of entrepreneurs created their own businesses without ten years later they would continue to be market benchmarks and attract consumers. This is the case of Danone, Citroën, Electrolux, Manufacturas Clima, LetiPharma or Metro de Madrid, which during these months celebrate their first hundred years of life. They are included in this list of centenary companies that are already part of other Spanish entities such as Aznar Textil, Banco Sabadell, Santander Bank, Occidente Catalana, Codorniu, Loewe, Mahou, Miquel and Costas, Loewe, Mahou and Osborne. or as Bacardi, BMW, Coca-Cola, General Electric, JC Penney, Lexus, Nikon, Robert Bosch and UPS.

All of them have managed to survive the economic crises produced in these years, they have survived periods of war, some have suffered seizures in the road that have changed their ownership many times, but have reinvented one of # 39 u leitmotif and they are adapt to the successive market changes and changing consumer tastes. They have even foreseen them or found great business strategies that enable them to remain leaders.

At times, the key to the survival of these centenary companies has not only been in a market idea or knowledge, but in knowing how to diversify their activity to other sectors, in acquiring other competitive companies or in internationalising. be. in other countries that would enable them to generate income when their indigenous markets were experiencing difficulties.

DANONE The first yoghurt has a Spanish flavor

In 1919, the Spanish Sephardic Jew Isaac Isaac began to sell the first yoghurt made with milk fermented in Barcelona, ​​where he saw that many Spanish children suffered from digestive problems, and launched the Danone brand. . This name comes from combining his son Daniel (from the name Danon) and number one in English (one). The first factory was located in the Raval area of ​​Barcelona and the production was made by hand, with the evening so that the produce was fresh the next morning when it was delivered. His presentation was in reusable jars, originally made of porcelain and then glass. In 1929 Daniel Carasso established a Parisian Yoghurt Association and decided to move the headquarters to Paris, where a larger factory was built. With scientific research and innovation in your DNA, t Danone's success is based on diversification, entering new markets and introducing innovative products, such as natural yoghurt or flavored yoghurt. In 1961, he merged with Gervais, a leader in cheeses, which enabled him to expand his range and launch his products like Petit Suisse. In subsequent years, we buy companies, such as the BSN exhibition, Kronenbourg brewery, Evian waters and Vella or Nabisco Font. The group recovers Danone's name in 1994 and is currently focusing on dairy products, water, infant feeding and medical nutrition. LETIPHARMA Pioneers in the production of penicillin in Spain

Dr Pedro Domingo Sanjuán, Professor of Microbiology at the University of Barcelona Autonomous and researcher at the Municipal Laboratory of this city, founded in 1919 at the Immunogenic Experimental Therapeutics Laboratory (Leti) and in 1922 was already working on a vaccine attached to a pharmacy. In 1946, it was the first laboratory in continental Europe to produce penicillin and was one of the promoters of pharmaceutical antibiotics. LetiPharma was also the first laboratory authorized by the World Health Organization to produce the flu vaccine in Spain, which began in 1960. The company has a biopharmaceutical, chaired today by Jaime Greco, offices in Barcelona and a plant research laboratory and industrial allergies in Tres Cantos (Madrid). Specializing in solutions for the immune system, the biopharmaceutical, there are subsidiaries in Germany and Portugal. On October 17, 1919 King Alfonso XIII opened the first line of Metro Metro, with only 4 kilometers and 8 stations, despite the initial difficulties, as no one believed in the project the engineers Carlos Mendoza, Miguel Otamendi and Antonio González Echarte. Vizcaya Bank contributed 4 million pesetas (24,040 euros), half of what is needed to realize it. The King invested a million to show his confidence in him, so ensuring that the companies contributed the rest. The architect Antonio Palacios is the father of the logo and design of stations, platforms and corridors. On the first day of its opening to the public, 56,200 people used this transport, whose tickets cost 15 cents. Today it has 294 kilometers with 300 stations, and 657 million people used it in 2018. This is the eighth metro in the world and one of the most accessible and technological. Electrolux was born from the companies Elektromekaniska and Lux, creating Elektrolux (changed the k to c in 1957). Lux was born in 1901, producing lamps and was responsible for the first vacuum cleaner in the Nordic country in 1912. He saw his founder, Axel Wenner-Gren, a vacuum cleaner who came from the United States (where he came from). first devices) and decided to produce it in Europe. His first model, the Lux I, weighed 14 kilos, and was sold for half the price. In 1926, Electrolux launches first absorption cooler, the D refrigerator, considered by many as a "great box" which solved the problem of keeping fresh food at home. He is also the author of the first washing machine for the home. Electrolux has strengthened its position in the domestic and professional equipment market through acquisitions, such as Zanussi, Kelvinator acquisitions, White Westinghouse or EIA equipment department. CITROËN | A pioneer in the automotive industry

André created Citroën, which ran a shell factory during the First World War, Citroën after the war. We travel to the USA to study Henry Ford's assembly line, moving to Paris, developing the Type A, the first European car produced in a low cost series. In a year we sell 10,000 units. In 1924 he introduced the first body of steel in Europe only, which replaced the mixed wooden and steel sheet. At the beginning of the 30s, Citroën tried to save his business, which was experiencing financial difficulties, launching a revolutionary model, the Avant Traction (front wheel drive), which dominated the market for 15 years. In 1935, Pierre Michelin of the late André Citroën replaced a small displacement vehicle, the 2CV, which was launched in 1948 and inspired the Spanish film Sor Citroën, starring Gracita Morales. 5 million units were produced until 1990. Citroën's financial situation worsened after 1970 and was absorbed by Peugeot, forming the PSA group. PENTAX | The Japanese group patented the pentaprism in the reflexes

Pentax is one of the leaders of producing cameras, lenses and optical equipment, established in November 1919 as Asahi Optical Joint Stock by Kumao Kajiwara, in a store in Toshima, a Tokyo suburb. In 1952 he launched his first camera, the Asahiflex, which became Japan's first SLR (reflex), to patent the pentaprism that all SLR cameras use today. His contribution was fundamental in developing systems with autosocial, another vital element of any reflex team. Just from the patent pentaprism there is a name Pentax, as the company is well known since 1957. Eleven years ago it was purchased by Hoya Corporation, a Japanese lens manufacturer, which sold Pentax camera business t to the printer and the Ricoh copier maker in 2011 and later the business image systems. Today it is called Pentax Ricoh Imaging. In October 1919, the airline of the Dutch KLM (Albanvaart Koninklijke's Maatschappij acronym Maatschappij) was born and in May of the following year he made his first journey, covering the route between Amsterdam and London, carrying two British journalists and loads of newspapers. Today, this is still the oldest airline under its initial name and in 2003 we merge with Air France to create one of the largest air groups in the world. Two months later, KLM, in December, began his tour of Avianca (an acronym of Aerovias from the Americas) in the hands of Colombian and German capitals with Colombo German Air Transport Company, Scadta, based in Barranquilla. The largest area company in Colombia, which has also been listed on New York Stock Exchange, has the second largest fleet in Latin America, behind the London Latam Airlines. United Artists' studios were established in February 1919 by four cinema icons: Charles Chaplin, Douglas Fairbanks, Mary Pickford and DW Griffith, with the aim of managing their own interests rather than relying on commercial studies. At the time they were responsible for Chaplin films (City lights, Modern Times or the Great Dictator) and titles such as The Machinist of the General (Buster Keaton), Duel to the Sun, With skirts and to the crazy thing and Apocalypse Now, besides sagas such as Rocky, the Pink Panther or 007 Bond Bond Agent. During this century, the studios, which went public in 1957, have gone through different owners. In 1981, he went to the hands of Kirk Kerkorian, owner of Metro Goldwyn-Mayer. The new MGM / UA was sold to Turner and then reprinted by Kerkorian and later by an alliance between Comcast, Sony and the banks.