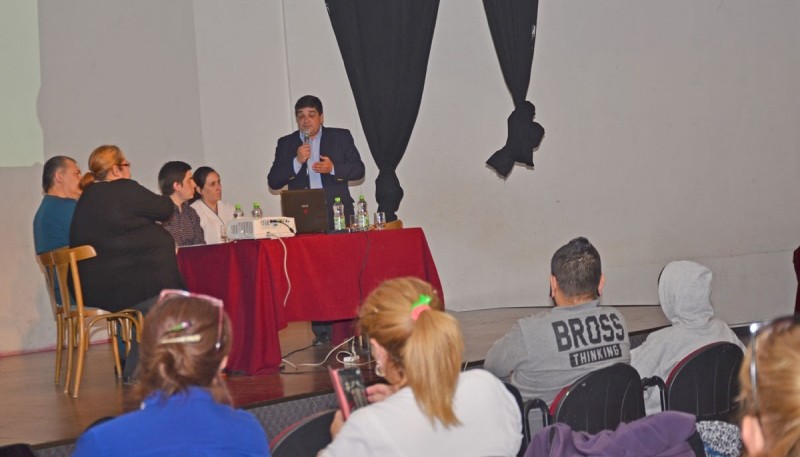 Diabetes Day was commemorated worldwide, with different activities aimed at raising awareness of this disease, which affects 8% of the Argentine population. Thus, the ASPEDI (People with Diabetes Association) organized an argument in the Cultural Complex auditorium, with the presence of recognized speakers and different activities for patients with diabetes, members of the family and the community generally. On the other hand, the Lions Club also called an open talk to students, teachers and members of the community of the community of San Benito community.

In both parts, the provincial legislator and doctor took the profession Claudio García, who was going to address those who are present to discuss the characteristics of the disease, strategies prevention, patient care and current treatments, as well as the social impact and economic impact of diabetes in the public health system.

Given the motto of this year's campaign is "diabetes and family", García emphasized the patient's relationship with his family environment, highlighting this is a great interest to young people on this problem, which mainly gave evidence of cohabiting or having someone with diabetes in their immediate environment. In this regard, the legislator said that it is very important that young people are interested in these issues, because they have a key role in preventing the disease.

On the other hand, in the talk that he gave in the Cultural Complex, Garcia also focused on the debate on new treatments and the progress of medicine in this area, as well as presenting the letter ASPEDI, Andrea Lepio, the copy of the decision Chamber of Deputies who declared a Provincial Interest activity. In this decision, the daily work carried out by the Association for information and recognition of the disease, as well as the strategies for dealing with treatment, care, family participation and community and promoting activities are highlighted healthy. Avoid the appearance of the disease in people who have a presumption to suffer.

In both conversations, among the issues addressed by García also highlighted the social and health effects of the disease, revealing that around 8% of Argentina suffered from diabetes. Other topics covered by the doctor were symptoms and ways of detecting the disease, preventive measures, diabetes-related problems, risk factors and treatments.

Diabetes is a chronic disease characterized by the continuous elevation of glucose levels in the blood, which affects many organisms and declines the person's health. Although it can not be improved, with appropriate sequencing and treatment, the person with diabetes can stop complications and lead normal life.

World Diabetes Day is celebrated annually on November 14th and is the most important diabetes awareness campaign in the world. It was established by the International Diabetes Foundation and World Health Organization in 1991. It also celebrated today for the first time after the adoption of the Resolution in December 2006 of World Diabetes Day, which adapted Current World Diabetes Day on an official day of UN health.