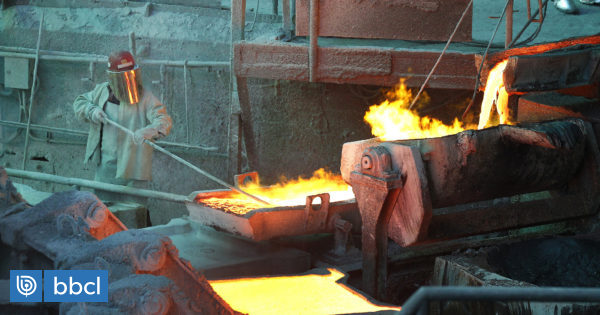 Copper introduced a new increase in the London Metal Exchange and thus extends its positive barriers, thanks to the assembly process between the United States and China in the commercial war as it is called.

Nowadays the red metal is trading at its best level in seven months and Thursday had a new market increase, indicating an increase of 0.62% and raising more than 10% increase so far this year: concrete, it traded at $ 2.89 per pound.

For Plusmining executive director Juan Carlos Guajardo, the tariff dispute course is key, estimating the average price this year is slightly lower than the government's commitment of $ 3.05.

"The copper market reaches a period of strong shortcomings in practice, which undermines optimism today and in the future prices," said the expert, adding "as the space This uncertainty is reduced, eliminating … We want to see a stronger price trend. "

In the meantime, the economist at Banco Santander, Sindy Olea, confirms, to the situation between the two powers, very specific supply pressures are added. "There is an Indian mine that has legal problems and parasi is produced, that has also helped boost the price seen in recent days," he said.

For specialists, copper could be an average of $ 2.9 this year. Something less than the Chile Copper Commission (Reduced) forecast, raised by $ 3.05.

On the other hand, other experts, as academic of the Catholic University, Gustavo Lagos; and Alpari César Valencia's analyst is even more optimistic and believes that the red metal could even overcome that barrier.

Copper was not the only new for the mining industry. According to information from Bloomberg, Chile will limit water rights for mining companies operating in the north, increasing the prohibition zones between ten and seventy.

"No new licenses will be allowed within these areas and the extensions to existing licenses must be analyzed and submitted to environmental authorities," said & General Water Directorate.