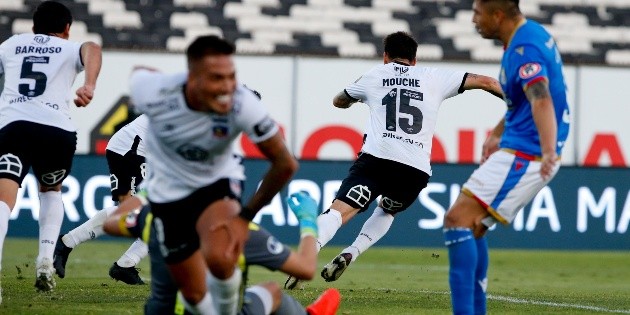 Colo Colo had an important win after defeating Audax Italiano 1-0 in the Monumental. While more than a thousand people cheered on the outskirts of the sports center. El Cacique jumped on the playing field with the obligation to win, after La Serena’s victory which re-scaled the popular cast to the final position of the National Championship table.

Gustavo Quinteros’ team, which could not sit on the bench, played a tactical game, without producing many scoring opportunities in the first phase. The second half showed a team with a different attitude, leaning on the competitive pitch and something refreshed. The adjustments: Matías Fernández and Javier Parraguez gave the team another mobility, a situation crystallized in the downs with Pablo Mouche scoring, after a great play by Buffalo. The initial whistle releases joy in Macul.

Parraguez was the one who got all the applause, including Walter Lemma, who served as coach, because of Gustavo Quinteros’ suspension, he had words for the forwards.

“We’re also improving Javier Parraguez and he’s making us very happy, because he’s working very hard to provide his contribution to the team.”he said at a press conference.

But the main applause, for the frontman, came from the fans who released all their emotion through social networks.

“I am always impressed by Parraguez’s tremendous play for Mouche’s goal. I’m glad Javier is starting to become more of a main character. Hopefully it will continue to rise, ”said one of the supporters.

I am always impressed by Parraguez’s tremendous play for Mouche’s goal.
I’m glad Javier is starting to become more of a main character. Hopefully it will continue to rise.


Do you remember those goals from Miralles to Ñublense in 2009? Well, that goal that starts from the drama of Parraguez and that Mouche ends, I think this will be the turning point where Colo Colo’s re-take begins.


Next Wednesday’s Colo Colo match will be against Curicó at the Monumental where the Cacique are hoping to start a winning streak.