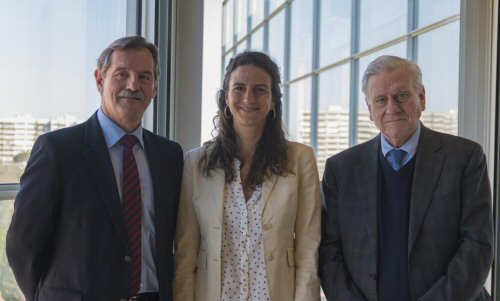 Thanks to the advanced imaging technology with PET / MRI, researchers at the National Center for Cardiovascular Research (CNIC) in Spain have decided the presence of inflammation in the arteries in areas where atherosclerotic plaques do not yet exist. The PESA-CNIC-Santander Study, published in the Journal of American Cardiology (JACC), has analyzed, with this innovative technology, the inflammatory process in the arteries of a group of people with plaques of atherosclerosis.

The data obtained shows, for the first time and in the largest PET / MRI cohort published so far, the presence of inflammation in the early stages of atherosclerosis, particularly in regions where there is no plaque and, in addition , that the inflammation found in the arteries can be a symptom before the appearance of a plaque that leads to cardiovascular disease, such as stroke or stroke. Researchers are currently analyzing the role of arterial inflammation in this process, information that would establish an early diagnosis and support the development of new inflammatory therapies for this disease.

Although atherosclerosis disease is known to be chronic inflammatory disease, the prevalence and distribution of inflammation in the early stages of the disease is unknown. The PESA-CNIC-Santander is a proposed study, directed by Dr.. Valentín Fuster, which includes over 4,000 participants of intermediate age and evaluates the presence and development of sub-clinical atherosclerosis – without symptoms – thanks to the use of innovative imaging techniques t

The results now published in JACC are the result of using advanced imaging technology with PET / MRI in 755 asymptomatic individuals as part of the PESA-CNIC-Santander study, with an average age of 49. age, and introduced plaques of atherosclerosis detected by 2D / 3D vascular ultrasound and / or accumulation of calcium in the arteries.

The main objective of this work, which explains that Leticia Fernández-Friera, a co-investigator and cardiologist at the University Hospital of CNIC and HM Montepríncipe, "was characterized by the vascular inflammation at the level of the carotid arteries; ■ responsible for supplying blood to the brain and the head, from the aorta – the main artery of the human body – and from the harsh-female arteries – they supply blood to & # 39 lower extremes – in people with known sub-clinical atherosclerosis. "

Dr. Valentín Fuster, Director of the NYCW and project researcher, underlines the usefulness of this modern technology from vascular diagnosis through visualization, PET / MRI, which has allowed us to further identify that only one tenth of the atherosclerosis plaques are # 39 present inflammation. "Explains Javier Sanz, CNIC researcher, co-researcher of the research, that the characteristics of atherosclerosis plaques that show inflammation or overeating are: large plates with higher cholesterol content and their positioning in the arteries and female biocides. However, "the majority of the increases or the inflammation identified in this sub-population of the PESA study had been located in arteriovenous segments of a atherosclerosis plaque," she said. Sanz.

In this sense, Dr. Fuster pointed out that these findings show the potential of this technology for inflammation imaging in in vivo associated with systemic atherosclerosis, its study in the early stages and the identification of individuals likely to t benefit from early intervention. "Future studies should investigate whether inflammation precedes plaque development and evaluate the quantitative value of inflammation in the evaluation of cardiovascular risk," adds the NMCW director.

Dr. Fuster highlights the commitment of the Santander group and the CNIC for a scientific project as the PESA is a model for its pursuit in the scientific and business world. "The contribution to the overall scientific knowledge and population health of this study is of unpredictable value," it emphasizes.

In this sense, Dr José María Mendiguren, Director of Medical Services at Banco Santander and also the author of the study, notes that projects such as the PESA definitely put the Santander Group in a leading position in Corporate Social Responsibility for its contribution to The generation of information in an area is as important as cardiovascular health. (Source: CNIC)