Twenty-one-year-old in honor of the Remembrance Day ceremony at N.B. 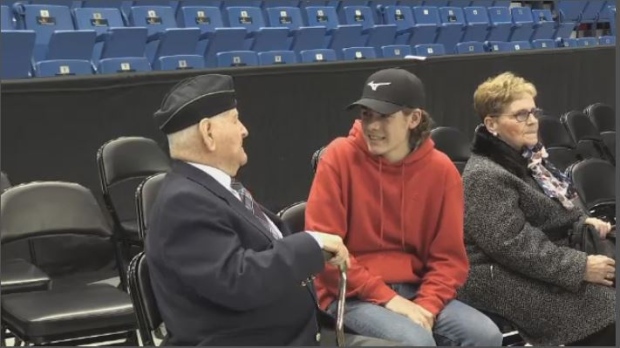 He had raised up in salut, George O Kelly made a watch over the past. He was born the same year with the arm, and 100 years old, Kelly was the reviewing officer for today's service.

Kelly is a Second World War veterans who went abroad as an air engineer with the Royal Air Force of Canada.

"I had no great patriotic desire to go to war," said Kelly, "But everyone else was going, so why."

But now, many years later, he said that no-one should never forget those who gave their lives.

"We lost people and we would go down to the pub, get some beer and start talking and you know, someone says, and you should dead and here is the most amazing man, well we would say – he was the best man ever there, "said Kelly.

But Kelly says he has left the war with some good memories too, meeting a 52-year-old wife during that time.

"They really met in dance and were separated for a year and wrote letters back and forth for the whole year until she was able to come to Canada. She was from England, St. Netos," says Kelly's granddaughter, Cst. Kelly McIntyre.

100 year old Mary Richards was born in the fighting year, who worked as a former nurse caring for WWII veterans and felt that there were very serious losses in the home.

"I had four brothers in the service, two of them went overseas and they did not come back," said Richards.

"I remember them as two very athletic young young men. They were in sports and as a young sauce today, they enjoyed life," he said.

He set the two hundredth anniversary of a break in memory of friends falling at the ceremony today at the Harbor Station.

"I've been born in the year when the signature was signed, I'd be born before the sign was signed. The connection to the past, we thought that would be & # 39; The event was special, "said Ceremonies Field, Bernard Cormier.

Both share a connection disappear with the past, but one who helps to make a generation in the future never forget.