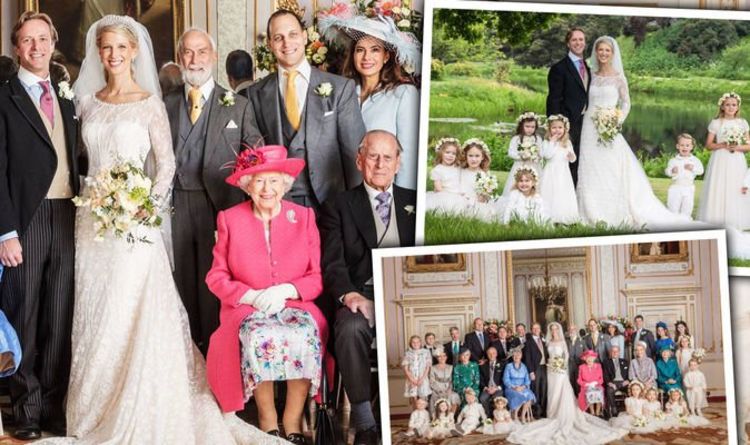 One photograph shows the whole married party inside Frogmore House, at Windsor Castle, where Lady Gabriella's wedding reception was held. In the picture, the Queen is all smiling as she sits alongside Prince Philip and next to Lady Gabriella in the decorated surroundings of the Duchess of Kent Drawing Room. The Prince of Wales is Prince Michael of Kent.

They also shared a picture of the bride and the happy groom with their bridesmaids on the private lands of Windsor Castle in the set by Hugo Burnand, who was also an official wedding photographer of the Duke and Duchess of Cambridge.

Another closer picture shows Dame Gabriella Windsor with her new husband, Mr Kingston, standing in front of the beautiful lake and the domed Mausoleum of Queen Victoria's mother, The Duchess of Kent.

Gabriella amazed the crowd in four fashion designed wedding dresses Luisa Beccaria – the same label that designed the other three lobbyes she wore for her Saturday ceremony.

She wore the first dress during her adaptations at St George's Chapel, bright guests in ivory lace dogs with bodice fitted, with a neck embroidered with embroidery stretching down like the dress sleeves.

Her wedding dress also included a six meter cover made of layers of pink and white twine, with a Russian style Fringe-style tiae worn by her grandmother, Princess Marina, Duchess of Kent, and her mother, Princess Michael of Kent, for their weddings.

Gabriella, 38, changed his second outfit during reception and a third party chose for the evening celebrations.

A host of senior senior guides attended errors including the Queen and Prince Philip.

Prince Harry made an unexpected appearance as it was previously thought that the new father chose to sit at home with Meghan and his newborn Archie.

Sarah Ferguson was also seen with the former Prince Andrew husband and daughter Princess Beatrice who brought a special guest.

The Duchess of Cambridge's sister, Pippa Middleton, joined the celebrations with her husband James Matthews.

Mr Mozzi is likely to have met the Queen at the event.

Ella, as her family knew, had worn a purpose-built wedding grown by Italian designer Luisa Beccaria and a Russian-style Fringe Tie also worn by her grandmother, Princess Marina, Duchess of Kent, & & # 39, to my mother, Princess Michael, on their wedding days.