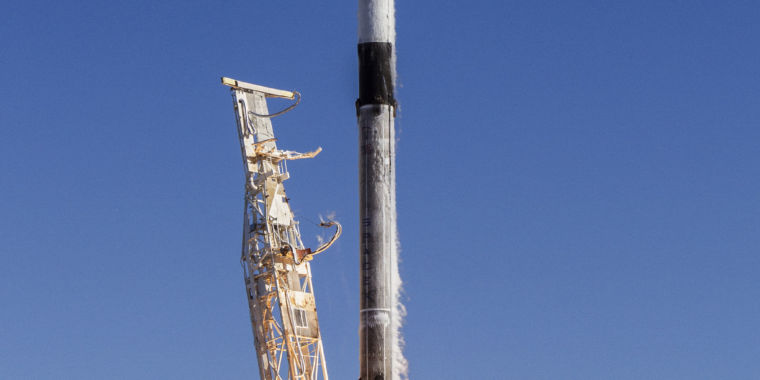 Falcon 9 first fought the space for the third time on Monday, and a rare outdoor at Vandenberg Air Force Base in California gave a good look of the resurrection.

This marked the first time for an orbit rocket to be taken vertically, and to turn vertical, for a third. In addition, with this 32th installment of the first step, SpaceX has now landed half of Falcon's 9 ever launched rocks. Quickly now, the company fulfills its re-use of pledges with a new Block 5 variation of the Falcon rocket 9.

The sooty nature of the first step is striking in the above images, more because of the deep deep interface, which contrasts with the rest of the pristine white platform and a pay charge at the top of the rocket. SpaceX has given the best to wash or re-paint its first step ropes between flights, as it considers such cosmetic changes as unnecessary spending of time and cost. (The shingle rocket also reinforces the idea that SpaceX is a company that's doing things in the launch business).

Despite its view, the area is not black interfaces – a composite structure that connects the first steps and the second steps and the machine that can release and separating both stages safely – being painted. Instead, a new proprietary thermal protective cover covers the interface, and does not need a paint on it. This black material offers a contrast between the two stages and recalls the appearance of the company's first rocket, the Falcon 1.

"Obviously, aesthetics are a small factor in rocket design," said Elon Musk, founder of SpaceX in May, during the launch of the block 5 variation of the Falcon rocket 9. "But I still love from the fact that we have returned for our hunt the reasons for having a black interface. "

We will do too.