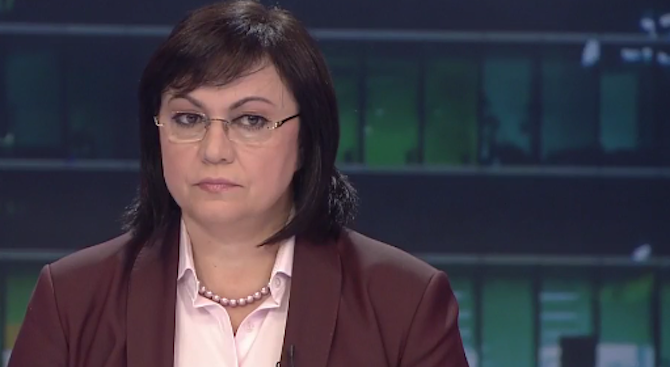 We left parliament for three reasons. The first – the night when the Electoral Code is voted, the majority of the referees violate the laws of Bulgaria, and that is the law on voting on machines, the right to appeal to the election results , and the third reason we left is the wild bargain on committee rooms. All of this was a great model from the back of the stage. This was noted by the BSP leader Cornelia Ninova

Kornelia Ninova is a Bulgarian politician of BSP, a member of the Alliance Parliamentary Group in the studio of "Panorama" on BNT.

"Mr Tsvetanov says that the arguments of the others must be properly answered, well there were 16 hours of opposition debates! The big question is the interests of a party. We want the rule of law, restoring civil rights of the people and seeking a policy transparent, "said the Socialist leader.

"The only thing we want is to get fair elections and everyone to vote freely. We do not want to vote for the BSP, but to vote freely. That's why our ultimate goal is to restore the Law law Early elections can not be a goal but a means of reaching a goal. Of course, early elections are compulsory because the MRF is right – the state is falling. That is the diagnosis of the disease, but we will not supports the MRF's proposal to set up a programming cabinet as it is totally unacceptable to us. This is again a distribution of power to harm the people, and then the people will become a real opposition, "he added. Cornelia Ninova

Kornelia Ninova is a Bulgarian politician of BSP, a member of the Alliance Parliamentary Group.

"The situation of the BSP on Venezuela as the UN is a lack of interference in political affairs abroad," he added.