To be condemned by the State to pay 5,000 euros in compensation to former N-VA senator is powerful "resigned" t 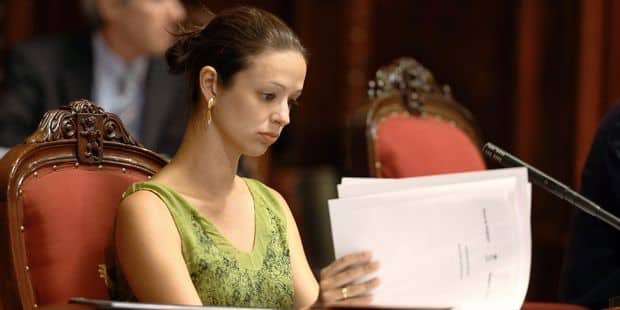 The latter claimed that she had been inappropriately deprived of her mandate, believing that she had to resign under the pressure of her party members. After resigning, Ms Geybels withdrew her plea, claiming that her consent was flawed. But Parliament had noted its resignation and had ratified the powers of its successor.

According to the ECHR, Parliament accepted Kim Geybels' resignation to his mandate without any procedural safeguards against arbitrariness, which undermined the substance of his rights guaranteed by the Convention. European Union Human Rights.

Kim Geybels was elected a senator on June 13, 2010, but in August 2010, during a private trip to Asia, she was suspected of committing drug-related offenses. denied. He informed of the controversies of the president of Parliament, a member of his political party.

On her return to Brussels on 31 August 2010, Mrs Geybels was called by the Speaker of Parliament, in the presence of N-VA President and party leader.

According to the former senator, at the end of the interview, she had to sign a written resignation letter. On 2 September 2010, the Director General of Parliament sent him a letter confirming receipt of the resignation letter and providing him with information on redundancy pay.

Through several letters, Kim Geybels Speaker told Parliament that she wished to continue her mandate as a senator. She argued that she was under considerable pressure during the conversation on August 31, 2010, and that she considered her resignation to be void because she was forced. The candidate also charged the President of Parliament following the instructions of the President of the N-VA who wanted his resignation.

On 12 October 2010, Parliament met in Plenary and Ms Geybels did not access the room where the service was held. The office of Parliament was of the view that there was no reason to question the validity of the senator's resignation. His conclusions were adopted by the Full Assembly and the successor to Mrs Geybels was succeeded.

Ms Geybels argued that the fact that an appeal was not possible in court to challenge the Plenary Senate decision was contrary to the Convention on Human Rights. He also argued that there was no clear and predictable regulation at the time about the procedure to follow if a senator resigned.

According to her, the judgments given by the Senate Legal Service were written "At the top of the customer" and "For the needs of the case". He also complained that he had not benefited from procedural safeguards against arbitrariness.

He examined whether the Senate's decision to accept that the candidate's resignation was valid constituted a breach of the Convention. He considered that the procedure before Parliament did not provide procedural safeguards against arbitrariness. Mrs Geybels and counsel were not listened to by the office. The senator was not invited to submit his arguments in writing before adopting the report in the office of Parliament. No reasons were given why the board felt it inappropriate to question the validity of Ms Geybels resignation.

In addition, the Court said, the office was made up of parliamentarians, two of whom had their direct contact with Ms. Geyebls as participants in the compulsion on August 31, 2010. In the opinion of the Court, so the composition of the office did not defend the applicant from the appearance of proportionate pressure of the parliamentarians concerned.

According to the Court, the plenary session of Parliament did not make it possible to correct the shortcomings of the procedure that occurred in front of the office. The Court therefore found that Parliament had accepted Ms Geybels' resignation without any procedural safeguards against arbitrariness, undermining the substance of her rights.