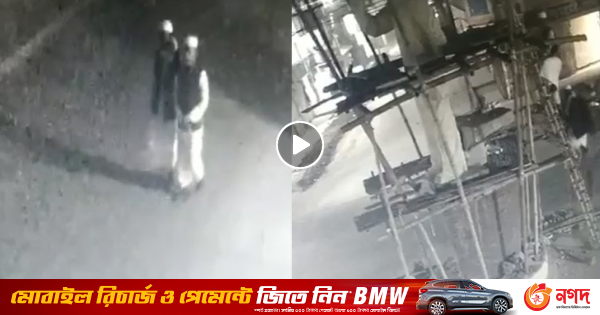 They were arrested late Saturday night from a madrassa in the Yugia area of ​​Kushtia. However, their identities were not immediately available.

Superintendent Kushtia of SM Police Tanvir Arafat said that those involved in the incident had been identified after watching CCTV footage. Good news can be given in a short time.

A Kushtia press briefing will be held on Sunday afternoon, he said.

However, several sources say that law enforcers have already arrested two students of the madrasa involved in the vandalism of the Bangabandhu statue.

Meanwhile, CCTV footage obtained by Jugantar shows two young men wearing uniforms and hats climbing a ladder on a sculpture under construction at 2.18 pm on Friday and vandalizing it with something hard.

After a few seconds of vandalism, they climbed the ladder and descended unharmed. The area’s Awami League has organized a protest rally at 3 o’clock on Sunday to protest against these events.

Meanwhile, after the vandalism of the Bangabandhu statue, the district’s BNP office in Kushtia was repeatedly vandalized and the business organization of the BNP secretary general, Chief Sohrab Uddin, was attacked and vandalized.

Two media workers were seriously injured while photographing the attack. They were admitted to Kushtia General Hospital.

On the other hand, members of the law enforcement agencies have tightened security in the area town as several unfortunate incidents occurred in Kushtia town including Bangabandhu statue vandalism.

Earlier, a storm of protests raged across the country, including the capital Dhaka, against the vandalism of the Bangabandhu statue being built in Kushtia. At one point on Friday night, parts of the statue’s right arm, its entire face and left arm were shattered. In protest, the Awami League and its allies, the Liberation War and various pro-independence organizations have staged various programs including demonstrations, human chains and torches on Saturday.