22.2.2019 – Uniqa achieved a little premium growth in the past year. The premium dropped in life insurance because the single premium business in Poland was withdrawn more than compensated by the other divisions. The results were strong, partly thanks to capital gain. Due to the strong over-capitalization, the insurer wants to give an intense bid this year to make acquisitions. And in any case you will stay in England, regardless of the Brexit. 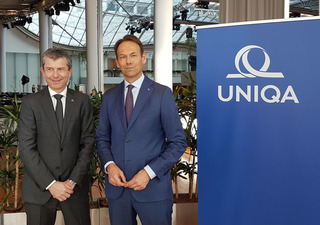 Uniqa Insurance Group AG was able to improve its key performance indicators in 2018, as the Chief Executive of Andreas Brandstetter emphasized when presenting the preliminary figures.

The premiums raised only rose by moderate 0.3 per cent, but this was because the life insurance of a premium in Poland was completely withdrawn.

As a result, the life insurance line has reduced a premium of more than ten percent, while the lines of property / injury and health insurance increase. The current premiums rose by 3.1 per cent.

Significant progress has been recorded in the results. Earnings before taxes have improved by eleven percent to about 295 million euros, the combined result grew by almost 42 per cent to 243 million euros. However, this includes one-off effect: The stake in the Austrian Casinos led to a 47 million euro profit.

The combined ratio improved "sustainably" in 2018, as CFO emphasized Kurt Svoboda. With the value achieved of 96.8 per cent, they are on their way towards the 2020 goal for the 95 per cent target.

One of the main challenges is the obligation to present IFRS 17 January 1, 2022 when calculating. Brandstetter said no more famous celebrities such as premiums, harm and benefits will exist.

This change is associated with huge financial costs. Brandstetter calculated this with around 50 to 60 million euros for the Uniqa, which is twice as much as the time spent when operating Solvency costs 2. However, customers are not willing to pay even more a penny for this.

Brexit also affects the Uniqa. One of a branch office art insurance subsidiary in London, about a quarter whose volume comes from London. Uniqa wants to "stay in the UK, regardless of the Brexit": In discussions with the regulator, they have found a solution, says Brandstetter.

Currently Uniqa has a solvency (SCR) ratio of around 250 per cent, with a target of 170 to 180 per cent. This is an advantage that mass movement is present, so Brandstetter.

At the same time, investments should only be invested in existing markets, but not in new markets. And the question arises: "How much do we still invest in the old insurance?". Therefore, he would also like to look at companies of the technical sector such as Insurtechs and Fintechs.

If acquisitions could not be made, at the end of the next strategy program at the end of 2020, one "would have to share shares to what we do with & # 39; r money ". For example, a share or special dividend purchase would be possible.

For the current year, Brandstetter expects moderate economic slowdown in Austria and Eastern Europe, but no big businesses are cutting.

A growth target business is for people who are injured. In this area there is light in Austria, but in Eastern Europe there is "huge potential".

In property and injury insurance, Uniqa expects the growth of premiums of around two percent per cent this year, and in health insurance with three percent. The premium volume in life insurance will continue to fall.

In short, premiums should grow easily; Pre-tax earnings are expected to be higher than the value of 2018 (after adjusting for casino sales). It is also proposed to increase dividends further.

The introduction of analysts of the preliminary figures for 2018 in English can be downloaded from the Uniqa website.