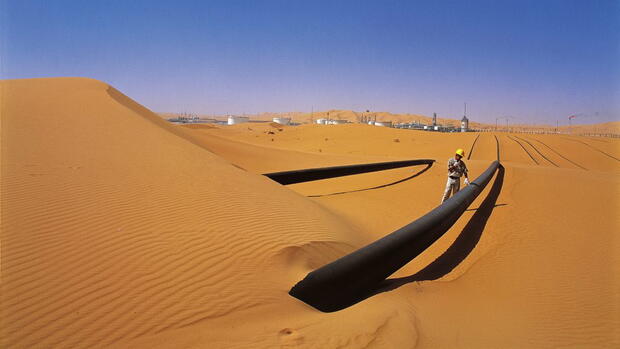 Frankfurt Upward movements in the oil market have been largely transient since the start of the corona pandemic. A week in early September was enough to eliminate all price increases over the summer. A brief interim peak of about $ 44 a barrel in mid-September was followed by a one-week period of weakness in which the oil price fell about 14 percent to less than $ 38.

But now a reversal of a trend is emerging on the oil market: For the first time in three months, Brent’s oil price rose above the mark of 46 dollars a barrel (about 159 liters) on Monday. A barrel of the North Sea variety cost $ 46.02. That was 89 cents more than on Friday.

The price of a barrel from the US West Texas Central Intermediate (WTI) rose 0.76 cents to $ 43.20. Since the beginning of November alone, the oil price has risen by almost 30 percent. And for many experts, there are some signs that the price rise will last.

Michael Tran, an oil specialist in RBC Capital Markets’ investment market, predicts oil prices could rise well above $ 50 a barrel by the end of the year if demand continues to improve at this rate. However, the rally poses obstacles in the event of delayed vaccine distribution.

The oil investors are infected by the euphoria of the vaccine on the stock exchanges. The main driver of the November price rally was the pioneering development of vaccines against the coronavirus. The companies Biontech and Pfizer, Moderna and most recently Astra-Zeneca have delivered promising results on the effectiveness of the vaccines.

Commerzbank expert Eugen Weinberg writes in a current study: “Hopes for rapid approval of the vaccines and vaccination start in the U.S. as early as mid-December are positive for market participants.”

A vaccine could stabilize global air traffic – thereby also stimulating demand for jet fuel. According to analysts at Bank of America, oil demand in the airline industry is still about 40 percent in the red for the year.

The new optimism on the markets is also helping oil stocks in crisis: The index of Europe’s largest oil companies, the “Euro Stoxx 600 Oil & Gas”, has increased by about 25 percent since the start of the month. Over the year, however, the minus is still up nearly 30 percent.

In the Corona crisis, demand for oil has fallen more than ever before in history. According to data from the International Energy Agency (IEA), it fell by 20 percent in April. For the entire year, the agency expects a decline of nearly nine percent.

In its latest market report, the IEA warned against too high expectations for a potential vaccine: It is unlikely that vaccines could support demand in the short term, IEA experts wrote. “It is far too early to know when the vaccines will allow a return to normal life.”

Vaccination hopes are being countered by increasing numbers of cases in the US and Europe and the risk of a new lockout. At the same time, however, the oil supply is increasing. Recently, the Libyan crisis state has significantly increased its production.

The OPEC province of Iraq is also producing more and more than it should be allowed under the OPEC agreement on subsidy cuts. After mandatory closures during the hurricane season, several oil platforms in the Gulf of Mexico have also increased production in recent weeks.

IEA experts believe that the mix of uncertain oil demand and rising supply will make it difficult to balance the oil market at least until spring 2021. The agency itself does not forecast the oil price, but excessive demand, as the IEA expects, is indicative of weaker prices.

Financial investors, on the other hand, are much less pessimistic – as evidenced by the latest developments on the commodity futures markets. Supply obligations, so-called futures, are traded there.

Commodity analysts pay particular attention to the price difference between the price of crude oil for immediate delivery, ie spot market price, and oil for delivery in one, two months or more. In a normal market environment, oil delivered in a month is more expensive than oil in the spot market. This marking reflects the cost of oil storage.

An RBC Tran analyst sets average oil storage costs at 25 to 30 cents a barrel per month. At the height of the corona pandemic, the later surcharge for oil was significantly higher as demand for oil in the spot market was low and stocks were full.

Meanwhile, the price premium for oil delivery in February 202 is only about ten cents above the January oil price. So at present it is financially unattractive to store oil. “This means the financial markets are pricing significantly improved fundamentals and significant oil shortages in the coming quarters,” said Tran, an RBC expert. From his perspective, the shifts on the futures market show a much stronger shift in sentiment than the price of oil suggests at first glance.

It is doubtful whether the spot market price will soon follow suit. If one derives a price forecast from the movement on the futures markets, this results in a Brent oil price of over 53 dollars a barrel by the end of the year, according to Tran. However, he warns that financial investors may be overly optimistic.

In addition to hopes for a vaccine and a return to oil demand, these price movements also reflect markets’ expectation that the Opec-plus alliance will adhere to its strict production quotas. In just over a week, the oil ministers of the 23 plus OPEC countries, led by Saudi Arabia and Russia, will discuss whether the current quotas should continue.

The expanded cartel is currently artificially reducing oil supply by eight percent compared to 2019. In fact, Opec plus wanted to promote more January to reduce the financial burdens on the member states. But given the uncertain prospects, ING strategist Warren Patterson expects the oil states to extend current production quotas by at least three months.

The vulnerability of the alliance is illustrated by data from the Bloomberg financial service on how individual states have adhered to their respective quotas. At first glance, the Opec-plus alliance community has exceeded its target, ie produced less than announced.

But this is mainly thanks to Saudi Arabia, where production has lagged significantly behind the agreed production quota. On the other hand, Iraq and Russia produced significantly more. In the past, such imbalances repeatedly led to disputes within the Opec-plus alliance.

If the Opec-plus alliance was surprisingly producing more oil from next year or if the alliance, as at the beginning of the year, failed to reach an agreement, the euphoria of oil investors could quickly evaporate again.

Click here to go to the Brent prices page, here to WTI rate.