The Mystery of Phobos solved a Martian moon 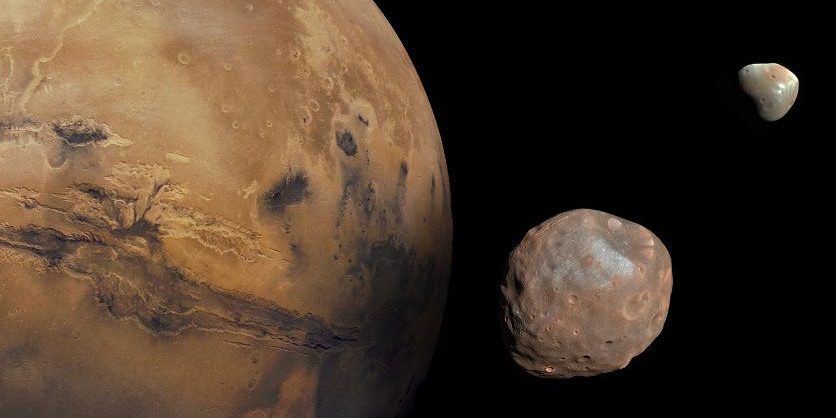 Why strive for the obvious at all times? Aside from exploring your own moon, there are many other puzzles to solve in space. Fiennese researchers are now facing an astonishing discovery.

Both Martian moon Phobos and Deimos.

Already something of Phobos hear? The ancient Greek word for “fear” also refers to one of the planet’s two moons Mars. Along with the smaller Deimos, Phobos turns to Mars. New results from the Vienna University of Technology provide important insights. A space mission will soon be taking samples of rocks.

The surface of the Martian moon Phobos is poorly weathered. But what leads to it? Fiennese researchers are dealing with this question. The small moon was discovered by American astronomer Asaph Hall in 1877. Knowing that Mars had two moons was likely to send him to “fear” (Phobos) and “horror” (Deimos). In Greek mythology, these are the two horses towing the chariot of the god of war of Ares. The first two Martian moons were photographed at a relatively short distance by the Viking orbiters in the 1970s.

Space: The weather in our sense does not exist

Back to the present: The Martian moon Phobos is in a very special position. It’s so close to Mars that not only the solar wind but also the bombing by particles from Mars plays a decisive role there. A research team from the Vienna University of Technology was able to demonstrate this in laboratory experiments. In a few years, the Japanese space mission is to take rock samples on Phobos and bring them back to Earth.

Of course there is no weather in space in the sense of the word – but rock can “weather” even in the vacuum of space if, for example, it is constantly bombarded by high energy particles from the sun. 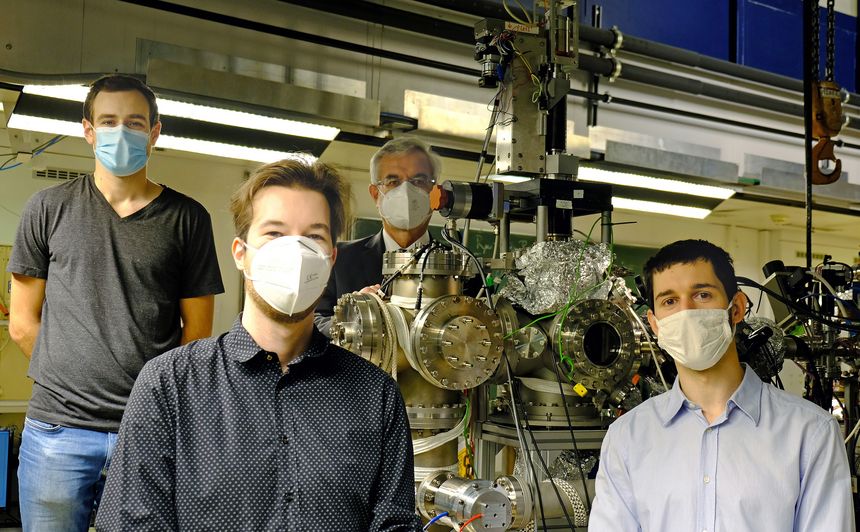 The research team in the laboratory.

How Did the Martian Moon Phobos Come?

There are very different theories about the origin of the Martian moon, as confirmed by Paul Szabo, who is working on his dissertation in Friedrich Aumayr’s research group at the Institute of Applied Physics at the Technical University of Vienna.

“Phobos may originally have been an asteroid that was subsequently trapped by the planet Mars, but it could also have been formed when there was a larger heavenly body colliding with the planet Mars.”

When examining such heavenly bodies, researchers must always consider that their surfaces have completely changed over billions of years because of the cosmic particle bombing. The rock on the ground remains untouched because our atmosphere is shadowing the particles. However, science can only understand the geology of atmospheric heavenly bodies – such as our moon or Phobos, if it is possible to assess “space weathering”. The Vienna Technical University makes an important contribution to this.

Looking for a job for engineers

Precision experiments at the Technical University of Vienna

The TU Wien team did not save any effort and conducted several experiments. “We used rock material like that from Phobos and pelted it with different visible particles in vacuum chambers,” explains Paul Szabo. “With highly accurate scales you can measure how much material is being extracted and what particles are affecting the rock and how much.”

Basically there are many minerals that occur on heavenly bodies like Phobos, the moon, etc. also on earth and so, according to our editorial team, can be used as analogue rocks. “The raw material for our investigations was particularly available from our collaborating partners at the University of Bern, who are experts in this field,” said Szabo.

The special properties of the moon’s Phobos were considered in the experiments. The distance to the surface of Mars is less than 6,000 kilometers – that’s not even two percent of the distance between our moon and earth. Just like our moon, Phobos is in a rotation wrapped around its planet: it always turns the same side toward the planet Mars.

“Due to the extremely short distance between Mars and Phobos, not only particles emitted by the sun play a role on the surface of Phobos, but also particles from Mars,” said Paul Szabo.

In addition, the Martian atmosphere is predominantly composed of carbon dioxide. Larger amounts of oxygen are also found in the outer areas of the atmosphere. If particles from the solar wind penetrate there with great force, oxygen ions can be formed, which in turn hits Phobos at high speeds and changes the rock there.

“With our measurement methods we were able to estimate the erosion much more precisely than before,” said Friedrich Aumayr. “Our results show that the effect of oxygen ions from the Martian atmosphere should not be neglected.

Aumayr also stresses the importance of distinguishing between the two sides of Phobos. While the solar wind dominates on the side facing away from Mars, according to the researcher, the bombardment of Mars’ atmosphere dominates when the sun is shielded from Mars.

Real Phobos samples will soon be available, which will then be evaluated by the researchers. In the year 2024 a spacecraft as part of the Japanese space mission “MMX (Martian Moon eXploration)” is due to reach Phobos and bring rock samples back to Earth.

You can find the original publication here.