Locking up leisure does little harm to the economy 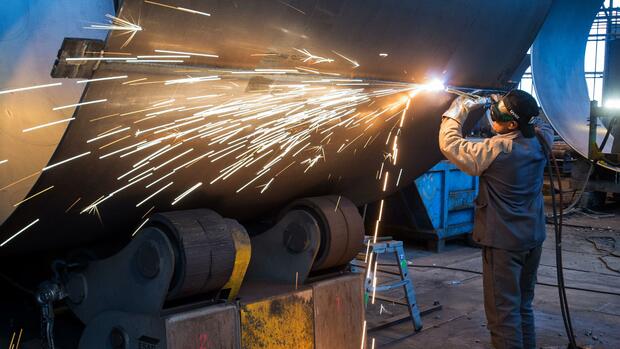 Despite the “locking light”, German industry has so far been able to get through the corona crisis well.

Berlin The proposed extension of the “locking light” has met with acceptance by economists. “My impression is that the federal and state governments are sticking to their basic approach: keep working, but limit contacts in your spare time. This is a strong defense to the German economy, “said Wirtschaftsweise head Lars Feld the Handelsblatt.

Michael Hüther, director of the employer-linked German economy (IW) organization, also regrets that restaurant owners, hotels, event organizers and artists are temporarily barred from working. But: “The ‘locking light’ doesn’t cause as much damage to the economy as the spring lock,” said Hüther. Because: “The industry will continue to expand in November.”

This is illustrated by the purchasing manager surveys published on Monday by the IHS British Markit Institute for November. According to this, the mood of purchasing managers in the eurozone has deteriorated significantly: the leading indicator is now at 45.1 points, well below the 50-point growth threshold. For Germany, however, the index continues to show growth at 52 points, albeit weaker than in October when it was 55 points.

The industry clearly remained on a growth path with 62.7 points: It benefited above all on the rise in exports to Asia. “Potential decline in the fourth quarter of 2020 should be significantly weaker than in the first half of the year,” said Phil Smith, IHS Markit Director.

The prospect of effective vaccinations also had a lively effect in this survey. Buyers assessed their business prospects within a year as positive as last year in March 2018. The service sector was hit by the new contact restrictions, while the industry continued to grow.

“We found that incoming orders improved rapidly after the first lockout and followed the trend path before Corona,” said economist Hüther. In the third quarter, gross domestic product (GDP) grew by 8.2 percent after the spring recession.

Is there a risk of an accident next spring?

Because October is still going well, Hüther now expects “stagnation in the worst case, but no minus” for the fourth quarter. From his perspective, the first quarter of 2021 will be more of a problem: Then the Christmas business will be over and the temporary VAT cut ends.

The economically wise men had already included the effect of “locking light” braking in their annual report on November 11th. “We have also assumed that restrictions will drag on over the winter,” said head of Wirtschaftsweise Feld. For 2021, the economy expects 3.7 percent growth. It is important that the schools remain open. Otherwise, there would be a bigger decline because many parents would have to reduce their working hours.

Let the pandemic run with no contact restrictions, no top economist advises this in this country. “Too tentative measures would mean even more damage to the economy,” said Marcel Fratzscher, President of the German Institute for Economic Research (DIW).

The International Monetary Fund (IMF) has also decided that the economic situation will get worse as soon as the health system reaches its limit: Many people then voluntarily stay home, damaging the economy as a hard shutdown.

As for the amount of compensation to companies, economists’ opinions differ: “For purely economic reasons, I think it makes more sense to compensate less,” Feld said. “Creative destruction works best in the catering sector in particular: a pub is quickly reopened when it works again,” he said.

However, compensation for lost sales is likely to be required for legal reasons if only individual industries are closed and not all companies. “For economic reasons, it is better to selectively close and compensate industries than decide on comprehensive locking,” Feld said. Especially since the closed sectors make up only four percent of Germany’s Gross Domestic Product.

Fratzscher contradicts this and insists that the state should continue to support the economy. “However, it cannot replace the lost sales permanently,” he warned. Companies should be helped to reimburse their costs. “Individual self-employed people could be given access to the benefits of short-time working by exception so they don’t fall back on Hartz IV,” he suggested.

Hüther, on the other hand, believes the state should extend November assistance until December 20 only. “It would be administratively impractical to keep changing it,” he said. And: “If vaccinations can start from mid-December, the end of the pandemic will soon be in sight.”