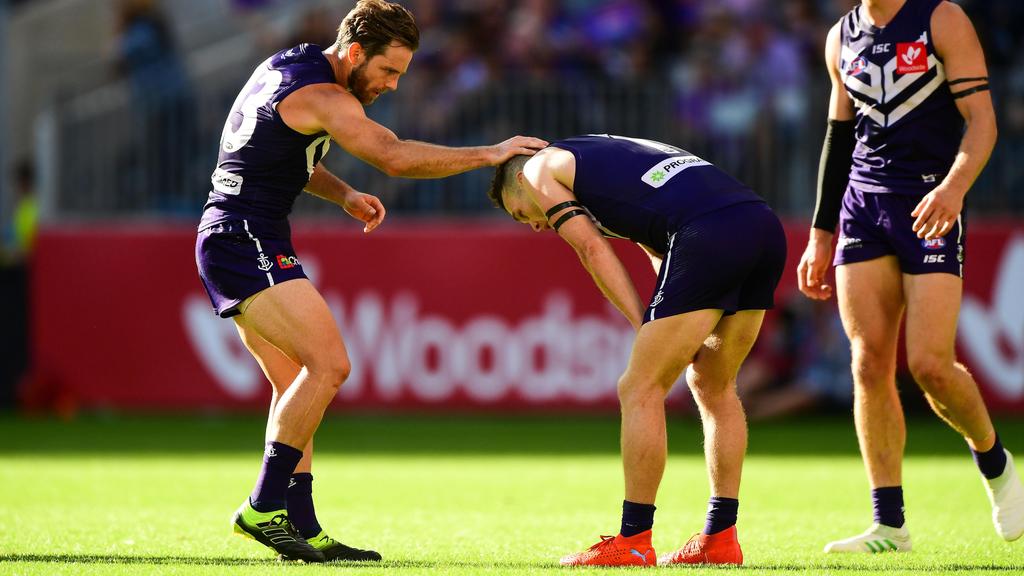 Fremantle expects Hayden Ballantyne for at least three weeks, after a little forward proceeding right in the fourth quarter at 82-point Dockers over North Melbourne at Optus Stadium.

Meanwhile, the return date for the thriving recruitment of Jesse Hogan is still unclear, despite reports that the forward star is pushing to play against Gold Coast on Sunday.

“It is a low level injury and it should only be kept for a short time,” said Jason Weber, Fremantle's performance manager, about Ballantyne's frustration.

“It's unfortunate for Hayden, he's trained very well for this point and made a great effort in the game.” T

It is said that Hogan is keen to make his first club against The Suns at the Metricon Stadium this weekend, having sat out one to deal with a mental health concern.

Lyon did not rule out the return of the star, but said that the decision on its availability was in the hands of the Fremantle medical staff.

“She trained last week (a) hoping she will be doing both sessions this week. It really is in the hands of all our experts, and I will be led as it develops during the week, ”Lyon told 7NEWS.

“At the end of the day, I haven't even reached Jesse. It's about our care, well-being and in the hands of our experts.

“I'm just a football coach and I plan the session and if Jesse is in there, I'll train him as I train everyone else.” T

Brandon Matera is expected to replace Ballantyne, who is eligible to face his former club after spending a week's ban on clipping Jake Waterman West Coast with a mad elbow during the JLT Community Series.

Sam Switkowski (rebound) could be another candidate to fill the veteran's shoes, as long as he passed a fitness test later in the week.

Stephen Hill (quad) – To be arranged

Shane Kersten (foot) – To be arranged

Harley Bennell (calf) – To arrange it