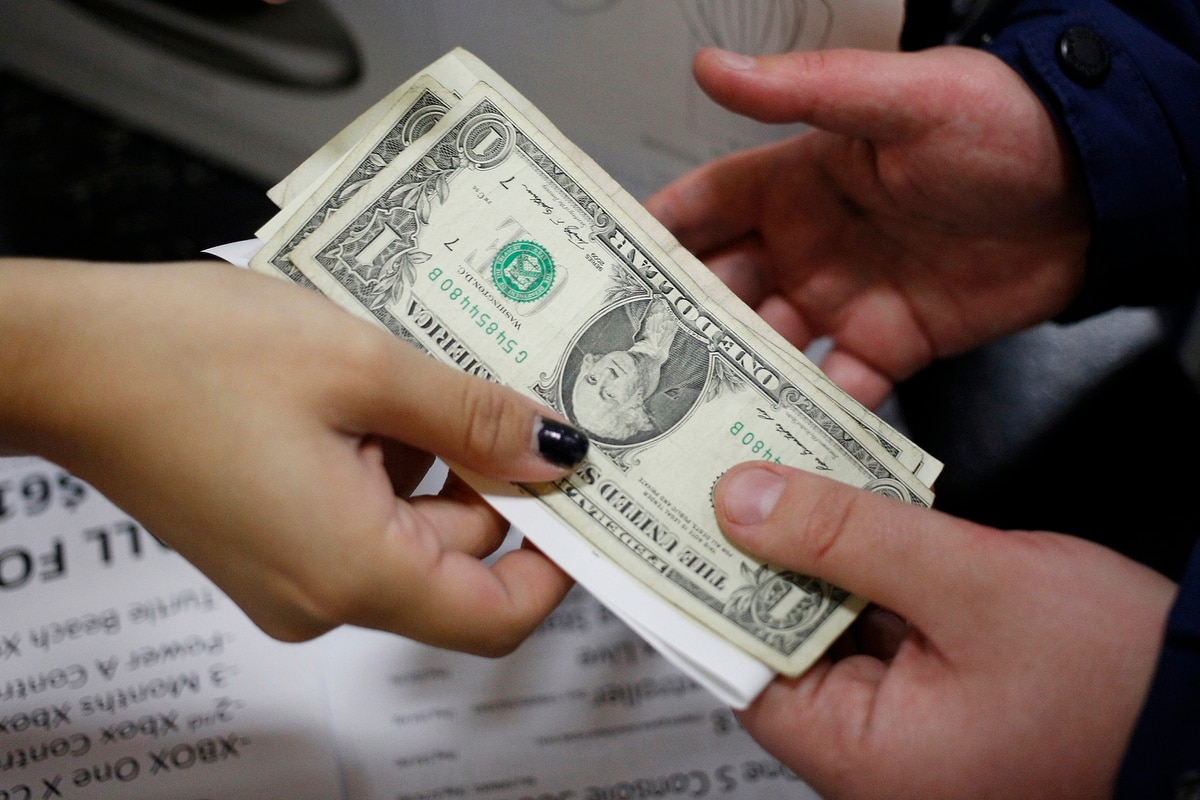 The 96% increase in the exchange rate from the beginning of March 2018 to February caused a 55% reduction in the private sector's foreign currency reserves. On the other hand, made "institutional investors and other investors", residents and others, net purchases of about USD 600 million, showing a reversal in the net sales seen in February 2018 for a 1,100 million USD products; The impact of infection from capital outflows from developing markets, which always stands out for its intensity in the case of Argentina.

That doesn't seem to be the only case of less demand for foreign currency from the smaller and smaller Argentina's ability to buy foreign currency with revenues that are declining in terms of more than 12% t but also from companies reporting sales reductions to their products at a rate of more than 10% in supermarkets and shopping, and up to 40% in durable goods such as motor vehicles, motorcycles and new homes t . 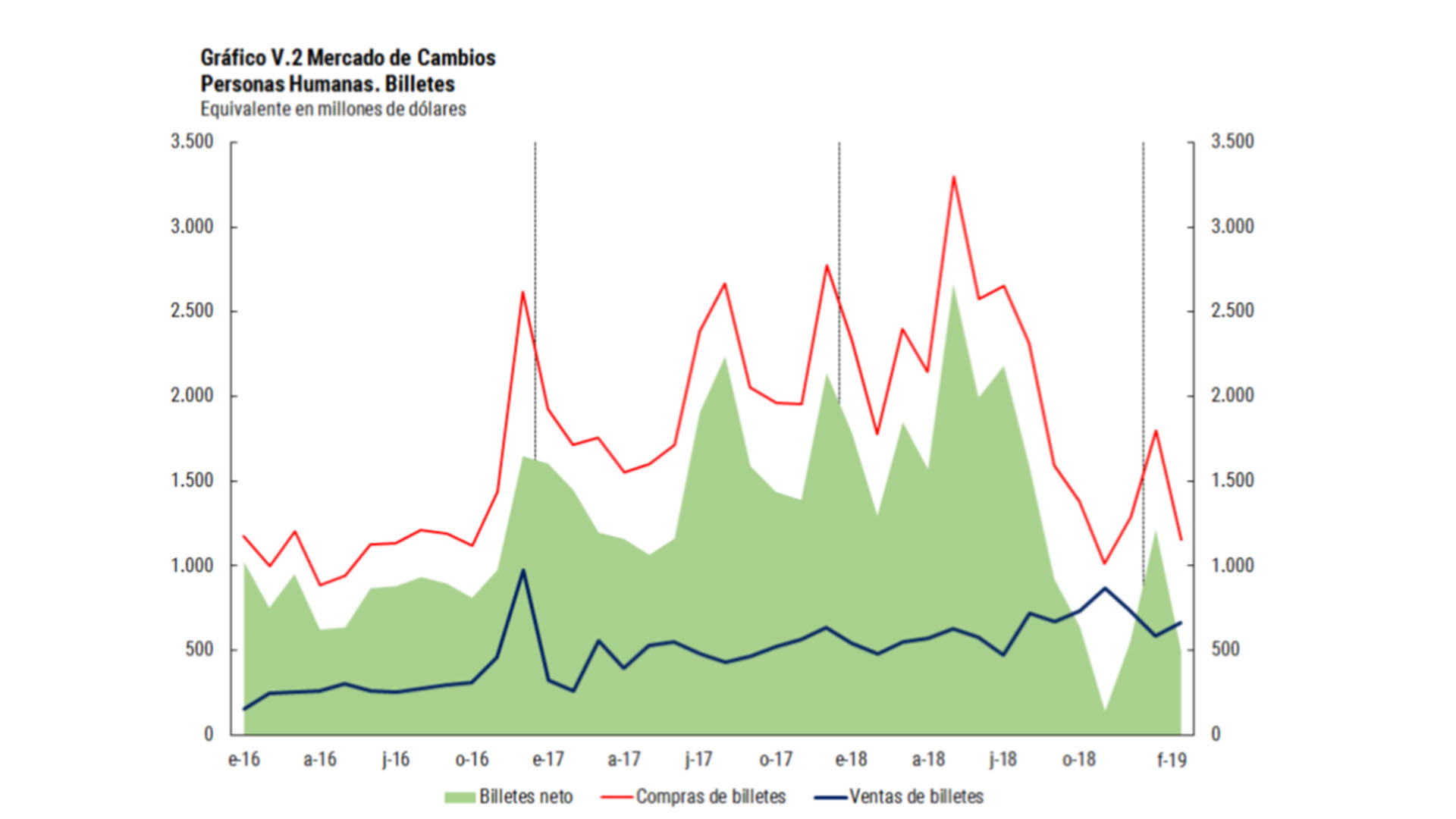 The phenomenon was seen as very intense in reducing the net sales by persons in 55% in a year, to USD 950 million, in relation to USD 2,100 million in February 2018 which can "clarify the lower purchases for palisade and for trips abroad ", highlights the Central Bank in its Monthly Exchange Market Report.

According to the financial authority survey "the number of individuals selling tickets in the exchange market again showed an increase in relation to January, a total of 660,000, and 75% in terms of the set of individuals in the same month of 2018 (380,000 At its In terms of it, the number of people buying tickets through the exchange market fell by around 350,000 customers compared to January 2019, a total of 920,000 people. "

The BCRA usually highlights: "operations with individual banknotes have been summed up in the lower strata of an amount: in February, 69% of gross sales and 67% of gross purchases were made for amounts below USD 10,000. While sellers per head of USD 1,025 per sellers, and an average purchase of 1,286 USD per month ".

Increase in transactions in the real economy

Anyway, moving money showed once again that the so-called "external asset formation", without direct say net savings in foreign currency by the group of residents, represented less than 2% of the total amount. implemented in February. exchange market.

The official report of Total second currency movement in 2019 has determined that the total amount to USD 51,600 million, 21% more than the level registered a year earlier, although the increase in the average daily has been weakened to 9%, due to the impact of the higher number of working days.

To the opposite, t The volume traded in future markets fell in February to USD 20,495 million, which equates to about USD 930 million a day, t 15% less than in February of the previous year.

The advent of the recession in March compared with March 2018, when the activity was at its highest in the last 12 months, would have led to the relative decline in external asset formation by residents continuing, but to t The opposite is. , the increase in voltage in the electoral climate, and the acceleration of inflation to the range of 4% per month, triggered the outflow of foreign currency by foreign investors, a phenomenon that led to the correction of the exchange rate to & t The area was $ 43., as I had experienced 6 months earlier.

According to the financial authority's statistics, in September, the multilateral exchange rate, which was the main currency ratio of Argentina's trading partners, had reduced the impact of inflation in all cases, rising to 135, 57 points with base 100 on December 17, t 2015, when the exchange rate was raised, the peso was depreciated by just over 26%, and has now fallen to 118.7, t the national currency was valued at 12.4 per cent.

Therefore, the market, through banks, requires the financial authority to have an increasingly higher interest rate, so that it can achieve its zero emissions objective, because otherwise it considers that the t demand for dollars is more attractive, given that note that he noticed that return to the actual level of 6 months before the currency should scale up to $ 49, to today's values, and therefore to match the impact of internal inflation other than the average for trading partners.