The service export tax could raise around $ 28,000 million 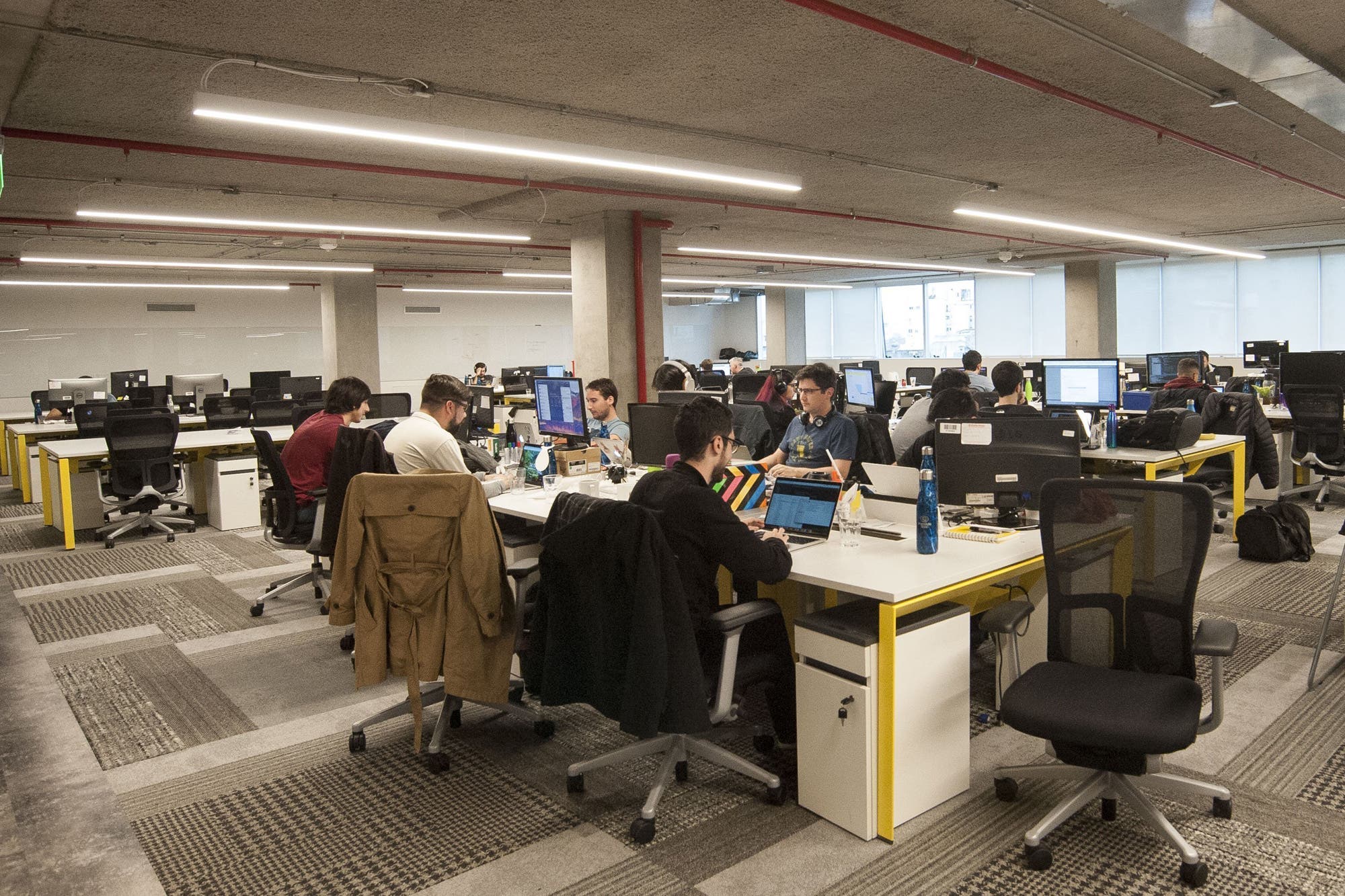 The sector produced some $ 6800 million in 2018 and the figure could be similar this year; how the tax will affect each item

With the beginning of the year, the Government regulated the collection of export right to provide services of up to $ 4 per head

export Although there are critics of different sectors, the projection is that the turnover of this industry in 2019 will be similar to the US $ 6,800 million produced in 2018, according to preliminary calculations of official sources. And, to stay close to those values, the collection for this tax could be around $ 28,000 million.

In addition, different sources consulted with targets as a positive attitude that the new tax had to be exempt from

that bill will be up to US $ 600,000 per annum and that the Executive pushes the knowledge economy law to continue and expand the benefits of software promotion law, which culminates in December this year.

Luis Galeazzi, the owner of Argencon, is the entity that includes companies that provide information-based services, carry out similar calculations. "The numbers that are known are the third quarter If we add the last four quarters, that is, the fourth of 2017 and the first three of 2018, the number of exports is US $ 6018 million , so I do not think that many change a lot in the fourth quarter, but we have to wait for INDEC data, "he said. And he predicted: "With regard to the export volume of 2019, many elements will play, such as the effect of exchange rate fluctuation and tax pressures," he explained.

On behalf of him, president of the CEMI, Aníbal Carmona, said the software industry "will continue to grow" in 2019 compared to the previous year, although " with the same police sector that is characteristic of the sector, with continuous growth in the last 15 years ". According to Carmona, in 2017 they set a record of US $ 1,800 million in exports and it was calculated that the 2018 numbers (unclosed yet) would exceed that mark.

In this sense, it would help the contribution of micro and small companies in the sector, who had exempt from paying the tax, a point recognized by the Government by Galeazzi and Carmona.

Another information on the horizon would be a knowledge economy law, which extends the benefits of software promotion law, which ends in December and adds sectors beyond software: audio-visual production, biotechnology, services geological, experimental research and development, nanotechnology, aerospace and satellite industry, artificial intelligence, robotics and industrial Internet, Internet Things, sensors, supplements manufacturing, virtual and virtual reality, and simulation.

"President Macri introduced the law in mid December 2018 and the idea is that it will be discussed in the next ordinary sessions and approved, so that the promotion system that comes to In December this year is being extended from January 1st 2020. We see an interest, it is a positive law for the sector, "said Galezzi.

In the meantime, Carmona said that the rule will encourage investment. "We betted, with the continuation of the legal framework of an information economy law, that companies can begin to take advantage of tax benefits and expand their investment in infrastructure, human resources and training."

"Cessi, we consider information law as a surpassing project, and we will bet that the special system will be for the new small and medium micro micro businesses, reduce the tax burden and the Earnings & Access to investments in training or R & D has a direct impact in creating more work and better quality, "he added.

Today there are almost 450,000 registered jobs in the knowledge economy and 150,000 jobs in companies that export. But estimates from the Ministry of Production estimate that there is an equal number of jobs
on its own initiative In these industries, the total occupied by nearly one million employees. Therefore, they represent 8% of the national workforce.

In the meantime, well-known export rights are managed, operator companies, audiovisual production, software development and financial services consulted by
THE NATIONAL They were of the opinion that the tax will affect their activities in the framework of international competition. And they highlighted the fact that the installation was fast until December 2020. So, he also warned that if they became permanent they will review their expansion plans.

In the AFIP he explained that the tax excludes exclusions but that "every service" is included. Therefore, the regulation reaches areas such as consultation, advertising, technology development and audiovisual production.

"This decision has a double negative effect," said Mario Julio, general manager of the Information Services Export Center (CESC) of PwC Argentina, which extends external audit services and has the US as its main client (there are 90% of your services). On the one hand, he warned of losing competitiveness against countries such as the Philippines, China, Panama or India, which are already up to 50% cheaper than Argentina. On the other hand, he said that the country's credibility was being affected by "changing the rules in industry that should be exploited and not damaged."

Julio said PwC was investing $ 20 million in 2017 to add 600 CESC professionals (there are 1,000 employees in the area) and who do not intend to change their plans. "We understand the need that the government needs to raise, we support it and we will support it, but it is important to comply with what we do. Temporary tax, this is how we inform our shareholders, "he said.

Sergio Kaufman, president of Accenture, received the measure with some silence. "It's not theoretical of the theoretical point of view, but it is understandable to stabilize the macroeconomic, if we're adding $ 4 to each export dollar contributor, they're well used, "he said. Accenture has 5,000 employees dedicated to export services. That activity meant 2018 US $ 300 million and expect to reach US $ 350 million this year. Kaufman drew attention to the sector's productivity by identifying the economy of the second export sector. "Last year, the sector generated US $ 6 billion and US $ 7 billion, behind soy and almost the same as the automotive industry, with the difference this sector has employs more people and is not important to components, "he said.

"In the telephone phone cost, the third corresponds to the manufacturing of the telephone and the two-thirds are information", defined president of Accenture, who launched a question on the air: "We want to be the third of & # 39; the ones that are produced or in the two thirds that add value? ".

The latest Indec Balance of Payments report, with data for the third quarter of 2018, states that the main services that are exported are business, such as consulting in administration, telecommunications, information and information.

In an audio-visual production area, tax news was received with more notice, although the effect was related. "We are small producers, so we do not believe that it will affect us, because of a lack of policies to promote Argentina's cinema, we have not exported too much for 20 years," said Cristina Agüero, president of the Association of Film and Media Producers. Glasses (Aprocinema). As detailed, of the Argentine producer's unions, only 20% would affect this tax.

The Underground production company is one of the affected and by its general manager, Gonzalo Armendares, this will reduce its chances of competing with countries in the region, such as Mexico and Colombia, with benefits . "We have no alternative but moved to prices, and we hope to be able to differentiate ourselves from the product quality strength," he said. Armendares explained that 50% of production was designated for export and, in the last time, the producer started working with regional chains, such as Turner and National Geographic. "This was a new opportunity and we now have to tie the pensil, hopefully it will be a temporary tax, although we do not know that that is not a belief. the country, "he said.

In the advertising area, Papon Ricciarelli, Don's agency partner, said: "For our industry, where the human resource is 70% of costs, this is a pity, because of the biggest we can sell it, the more people going to use. "The creative was worried that promotional equipment was not related to the tax, but said they trusted" repaid "over time. "Although it is quantitative, we find it difficult to compete with the countries of the region, at a qualitative level, it is very much appreciating local creativity," he said.

For Bruno Rovagnati, senior vice president and Managing Director of Latvian R / GA, the effect of the tax is "at the time of sale". The advertising company's executive said they will be forced to diversify between local exports and sales and to distribute production among the offices in the region. "Argentina is a great place for its talent, but it has such uncertainty and instability as we can see with this type of tax, if there are medium and long term plans, they sometimes get complicated. "

The software is another affected sector and one of the most prosperous in the industrial ecosystem, with a 16% growth rate per year in exports.

Carmona warned that the new tax was "an impractical cost to an industry as a fast, fast-moving software," but he noted that the rule exceptions were essential for hearing the damage. "Fortunately, we see that it was decided not to destroy a micro-enterprise ecosystem, which is a lot: from 5000 companies, 3500 are micro-enterprises," he said. After aligning with colleagues from other sectors, he said he "understood" the measure, given the strong financial crisis, but he considers it essential to be temporary.

Carmona said that the tax was in violation of what the government thinks, which showed her confidence in the sector last month, when he promised to promote the Information Law Economy when it opened the ordinary legislative sessions. "We see that the project will be presented in March, if that is not done, the forecasts will be very dark," he came to the conclusion.

Numbers of the sector


The services are the second export item in the country

"Last year, the sector generated US $ 6 billion and US $ 7 billion, behind soy and almost the same as the automotive industry, with the difference this sector has employs more people and is not important to components, "said Sergio Kaufman, President of Accenture.

More than wine and lemon

"Argentina's famous Malbec is exporting US $ 700 million a year, 10% of what services are exported, and three days of export information correspond to bush exports per year , "Kaufman often compares.

The main services that are exported are business, such as consulting in administration, telecommunications, information and information, according to data by Indec.

Software, on the increase

In 2017, the software reported a record of $ 1,800 million in sales abroad and, according to Cessi – the chamber of this industry-, the 2018 number (not yet closed) will exceed that mark and this year they will continue to grow, though not with the same police.