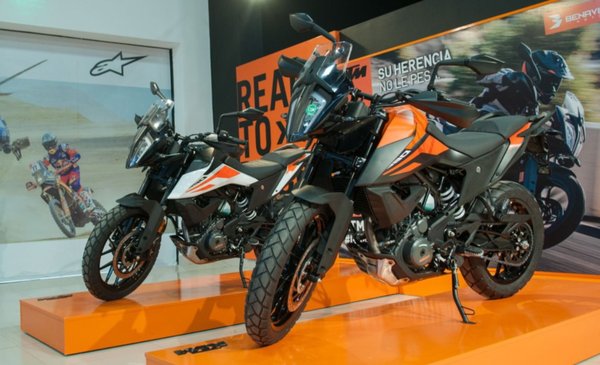 The new flagship model of KTM motorcycles is already in Salta. Without a doubt, the KTM 390 Adventure will be a flagship of adventure lovers and trail segment. While it may be considered a “starter” bike to open horizons on tracks, tracks and tracks, it is above all sophisticated and powerful.

There is no one better than Kevin Benavídes to bring a brand new Austrian branded brand new product to his land. The new units can be seen at the KTM dealership of the multi-promoter motorcyclist from Salta, located in Hipólito Yrigoyen 743.

The motorcycle inherits many features from “family members” in relation to its design and aesthetics. It sticks to the KTM way of Extreme and Purity with a functional and determined set of lines.

The Adventure 390 has its own identity. It enters the segment strong in power and weight, but also stands out with styling that flows directly from the larger Adventure line sisters and KTM 450 Rally skins.

The new Adventure shares the same Rally-derived trellis frame structure with the same combination of flexibility and stiffness, removable subframe and swingarm.

Features like the LED headlights reduce the profile of the bike and provide aggressive looking ergonomics around the tank. Low and sturdy seat panels provide superior control and comfort.

“The price-quality ratio is unbeatable,” he explained The Tribune Norberto Benavídes, an authorized word to talk about motorcycles. “KTM is a guarantee of durability and reliability. These bikes stand out because in practice they never go to the workshop,” added the businessman.

However, Benavídes Motos general manager Fernando Pereyra recalled that the dealer had all the after-sales service and that all KTM motorcycles have a two-year warranty and unlimited kilometers, one more example of the brand’s reliability. .

In terms of the technological equipment, the KTM 390 Adventure comes with many aids for the pilots. One of these is the “TC” traction control, which is a lean angle sensitive system with throttle valves that control optimum slip.

It has an Offroad ABS braking system, which offers better braking control on different terrain and the ability to lock the rear wheel to control skidding. It also has active ABS in curves, which allows users to use the full power of the brakes at sloping angles.

Above the handlebar is a 5-inch full color display, which adapts to ambient light and features a clear and redesigned menu system. The information can be captured at a glance and everything can be done with a switch on the left handlebar. Through a bluetooth connection to a smartphone, maps and directions for step-by-step guides can be downloaded. Phone calls and music can also be controlled through the screen.

The Adventure 390 is assembled at the KTM factory located in the city of Campana in Buenos Aires. More than 50 people work exclusively in the production of this model, which also includes spare parts from Argentina.

The careful choice of the latest generation four-stroke 443cc single-cylinder cooled engine was instrumental in shaping the multilateral personality of the KTM 390 Adventure. The stability and power supply provide satisfaction to any pilot, but also the excellent fuel consumption allow a journey of up to 430 kilometers with a 14.5-liter tank.