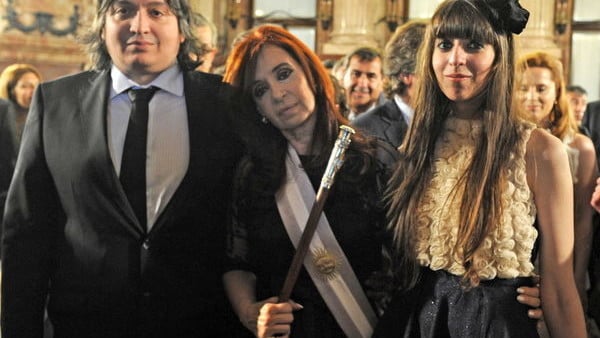 Through the Financial Information Unit (UIF), the Government asked Cristina, Máximo and Florencia Kirchner, together with Lázaro Báez and a further fifteen accused, to go to a trial in the case called Hotesur, where they are investigating Money laundering structure through hotel business. The FIU is a complainant in the case, and as you know Clarin, the Anti-Pollution Office (OA) will ask the same in the next few days.

The order accelerates the final part of the file that researched the business done through Hotesur SA (owner of the hotel Alto Calafate) and Grupo Austral companies, owned by Lázaro Báez, as well as & # 39; The Ministry recently by Osvaldo Sanfelice, a partner of Máximo Kirchner.

Following the request for a surrender presented by prosecutors, Gerardo Pollicita and Ignacio Mahiques, Judge Julián Ercolini received the European Union's application. When another government agency, the OA, makes the corresponding presentation, the magistrate would send the ex-president to trial more than a week later.

Hotesur will be the fifth case that awaits Cristina Kirchner, and a third place charged with Báez – lightweight for money laundering – for pollution.

With a writing of 200 pages, he agreed Clarin, the people responsible for the UIF, María Eugenia Talerico and Mariano Federici asked the case to go to the next case.

For the anti-laundering agency, the case is part of a general context where it is investigated, in many cases, "illegal society intended to seize public funds, and recycling carried out later and that would comply with dismantling public money ", express the writing.

Therefore, they argue that the cases are related, given existence "criminal institution" that had the purpose of "deducting and exploiting the money from public books" and that the case of Hotesur SA "is not only developing, but it's part of a group of investigations" where Cristina Kirchner was prosecuted as head of an illegal society who instructed the public to work for Báez, as the mother was causing others washing movements.

I have therefore been established, "a system intended transfer and hide part of the profits that were in the power of entrepreneurs, the former presidents themselves and their nuclear family through loans, buying property, renting different hotel complexes, building up improvements in those organizations and renting properties ", something researched in Los Sauces SA (other laundering case).

The presumption investigated by the Pollicita and Mahiques prosecutors is that pre-presidents and their children receive money "Through the hotel's business under a specific appearance of legitimacy", and ensured that they could declare these funds before the Anturruption Office, and before the treasury "hiding its true origin", probably illegally.

These transfers include Cristina Kirchner's daughter was 4.6 million dollars in Banco Galicia, seized two years ago.

According to the investigation, the alleged movements began with the need for Néstor and Cristina Kirchner to have "empty" fluid money to be able "Justify the purchase of Alto Calafate and Las Dunas hotels. "

Therefore, when asking for the elevation, the FIU agreed with the office of prosecutor, who, in the Hotesur case, indicated that the movement that the investigated criminal association linked contributed to a proportion of what was stolen from & The National State through the investigation has been confirmed. public road works, for the former presidents and their family kernel through a money laundering plan based on the hotel's activity and those carried out by the company Hotesur SA ".

Lazaro Báez, arrested since 2016, is another defendant in the case.

In this case, it was stated that "start and agree a coherent structure of people, sharing roles and stability over time for more than twelve years", allows the main defendants "Remove from boxes of public book pesos" and those reservoirs "have started a return route through different money laundering mechanisms in favor of the Kirchner family."

In the case, it was established that the former President's guest was part of "recycling process That was developed, with illegal reservations of public works and through Valle Miter de Báez, between 2008 and 2013. "However, Pollicita noted that the investigation" has not deleted "in this movement, and # 39 ; to liaise with other cases of money laundering where Sanfelice and Cristóbal López participate.

Prosecutors argued that the "economic circuit based on hotel activity" was established which allowed Kirchners to "regulate channel" funding that Báez receives from public work and moving the money through "society screen" to apply the same "to transport movements".

Judge Ercolini prosecuted 19 people, including Cristina and her children and Lázaro Báez and Martín's son. I've been responsible for being part of "complex corporate network"launched" to enter part of the proceeds collected as a result of State fraud (public work case) to circulate in the market ".

To do this, according to the prosecutors during the investigation, the defendants "came to the funds received along with Lázaro Báez, for the irregular assignment of public highway works in their province" origin "and multiple" businesses "with Australian companies", In order Give such commercial operations, "legal appearance".

The Justice decided that the previous case washing operations had: that Néstor and Cristina Kirchner were made "liquid money to justify the procurement of these hotel establishments." Between 2005 and 2009 there were more than fifteen for the sale of land and property between Báez K and the former presidents.

2) Using Valle Mitre. In second case, for the "planned economic movement of the hotel business", the signature Valle Miter SRL owned by Lázaro Báez, created months after the Kirchners procured the hotel and did it ; used in the money laundering scheme "received that money and applied to the hotel business, thus allowing the illegal gain to be removed from & # 39; to true origin ".

3) Money sealing for Valle Miter. The company did not have the economic capacity to pay the rent for Hotesur. So, who was injected with money was Austral Construcciones, the main public road works contractor. The company registered by Kirchner's hotel owner of the construction company payments between 2007 and 2015, for almost 71 million pesos.

4) Patrimony K. reserves income. These reserves were subsequently transferred to the hotel and former President of the hotel. In turn, Valle Miter sent money to other Australian Group companies (Kank y Costilla, Loscalzos a Del Curto, La Estación SA, Don Francisco) so they started renting unused hotel rooms. They guaranteed income for more than 14 million pesos for the Kirchner family.

Between 2009 and July 2013, Báez and Kirchner secured 27,592,110 pesos for rents to Hotesur SA. The figure is important, but more the proportion that keeps it in the total income of the family business. 54% of the Alto Calafate income came from the Australian Group.