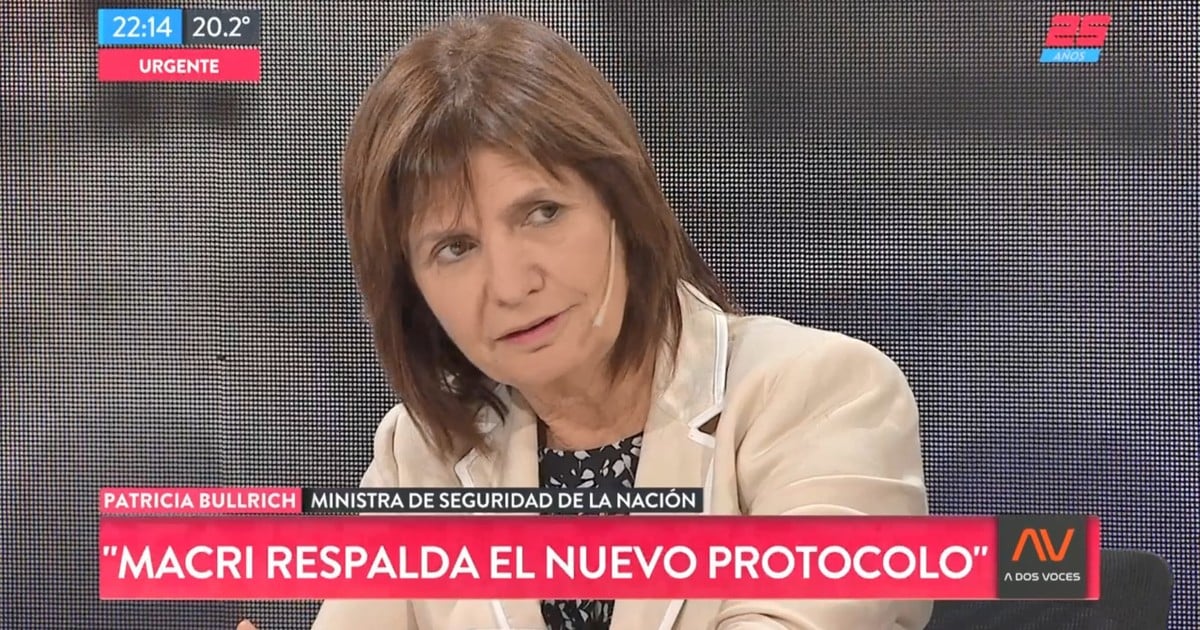 Security Minister Patricia Bullrich, on Wednesday, defended the new protocol that gave them more powers for federal forces and said he had the support of President Mauricio Macri. In addition, Elisa Carrió's criticisms answered: "It's not a fascinating protocol."

"We have talked to the President for more than a year and he is backing up. He believes that this helps to explain the cases in which the Justice has condemned unjustified police officers who had acted in accordance with their duty, "said the minister All News.

In this sense, Bullrich expanded: "We've got a lot of police and gendarms out of that situation they were condemned as being murdered and staggered, because we explained what was the behavior: they protected the citizen. " The causes of the soldiers Luis Chocobar and Carla Céspedes.

On the controversial statements of Elisa Carrió, who had ensured that "we do not want to go to fashion," Bullrich said: "I do not want to argue with Carrió. The protocol is not fascic. Regulatory is based on the agreements that Argentina signed as a country. We are copying United Nations regulations. "

He added: "It seems to me that there was no deep reading of this regulation ".

Regarding the possibility of the decision going through the Congress, as Carrió asked for a letter on their social networks, the minister explained: "If the police protocol is not enough, we have increased the Ministry's protocol and prescribing. I am willing to go to the Congress. If you want to provide a legality framework for the forces of the Forces, please welcome. Whenever it protects society and protects the agents in the use of weapons food. "And he wanted more: "If Carrió invites me to the Congress, I will go tomorrow."

The officer also spoke of the security policies carried out by the mayor of Buenos Aires, Horacio Rodríguez Larreta: "We had a debate on how coexistence between the rights of demonstrations and circulation is being carried out." And after pointing out that the president of Buenos Aires must "create a police force", he left praise for the "hardness" attitude that the Police Force demonstrated in protesting exhibitors in the Constitution.

The minister insisted that the protocol is "not new" and said it allowed agents to act in a risk of death. "When a policeman acts as a police officer, he should not go through court. I should not be in prison or half day"

Resolution 956/18, signed on November 27 by Bullrich, provides, in accordance with its duty, that firearms will be used "when other unintended methods are ineffective." In this way, the agents will be able to shoot without a loud voice or without previous assault.

According to a report signed by Mariel Fornoni, director of M & F, 59.2% of respondents agree with the official measure, compared to 39.6% which rejected it. There is a topic that creates strong arguments and only 1.2% prefer not to give an opinion.