One of the oldest ancestors found in Brazil … 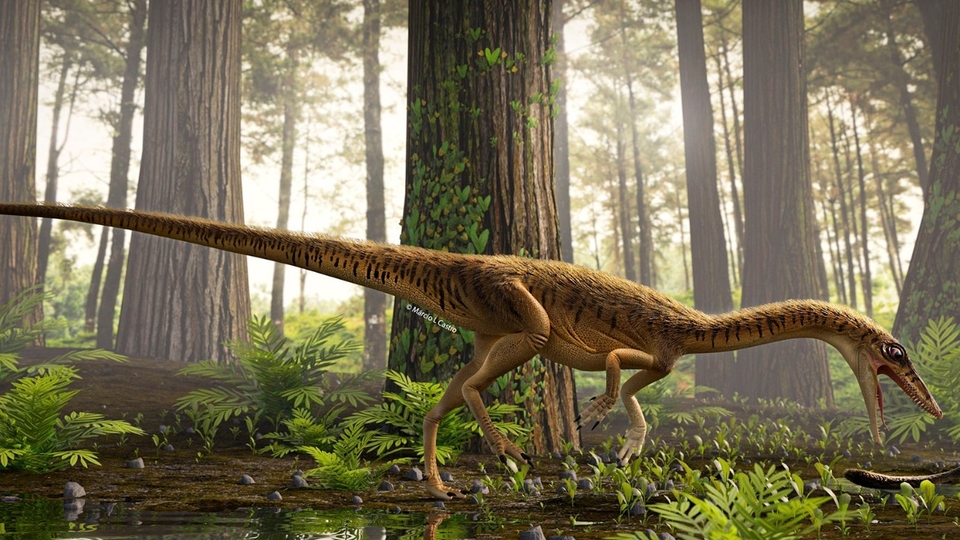 A new species of dinosaur recently discovered as “Erythrovenator jacuiensis” in the south Brazil and was determined to be one of the oldest ancestors of the Tyrannosaurus Rex that lived about 230 million years ago.

The novel specimen was also a predator, but smaller than the Tyrannosaurus Rex, and ranks as one of the most primitive members of the theropod dynasty, which in turn belong species such as the Velociraptor.

The person responsible for the discovery is Brazilian paleontologist Rodrigo Temp Müller, of the Federal University of Santa María, who published the discovery in the “Journal of South American Earth Sciences.”

Müller identified the new species of fossil femur he found during the summer of 2017 on rural property in the municipality of Agudo, in the southern Brazilian state of Rio Grande do Sul.

“We had very few fossils about these types of dinosaurs, most of them quite fragmented. This one I found is just bone, quite damaged, but it has features that are only found in the theropod dynasty ”, explains Müller.

“And within that lineage, it belongs to an animal we didn’t know until now. Although it is only bone, it is possible to see features we had not seen in other dinosaurs, “he adds.

“Erythrovenator jacuiensis” means “Jacuí red hunter”. Müller gave it that name because of the red color of the fossil and because of the river that runs close to where it was found.

Analysis to indicate the degree of kinship revealed that the red hunter would be one of the “most primitive theropod family dinosaurs already discovered”.

A small but agile predator

The older theropods, which are particularly difficult to find, were all carnivores, which is why they estimate that the “Erythrovenator jacuiensis” also feeds on meat, despite no traces being found teeth than skull to date.

“This is very interesting because it shows that this dynasty of famous dinosaurs, such as the Tyrannosaurus Rex or the Velociraptor, comes from a group of small dinosaurs,” he emphasizes.

Despite its small size, it is probably a very agile predator, because the fossilized femur has developed quite muscular attachment structures.

Although Müller has only one femur, he managed to emulate his appearance from other closely related studies of similar animals based on other materials found in Argentina and the United States.

The “Niemeyer Site”, a new trash of fossils to find

The discovery of this new species will help understand the evolution of the group over millions of years and confirm that theropods, of which there are few records, have been present in South America since the origins of the dinosaurs.

The exact place where Müller found this new species is called the “Niemeyer Site”, referring to the name of the family who owns these lands which has now become a gold mine for paleontologists in the region.

Experts believe that entirely new fossil litter is found at that geographical point, as other animals found there were also not yet known.

In fact, in that place they have found remains that correspond to the relatives of mammals, which perhaps served as food for the “Erythrovenator jacuiensis”.

However, dinosaurs were quite rare in ecosystems at the time, as they dominated the Earth during the Jurassic and Cretaceous periods, that is, between 201 and 66 years ago.

Prior to that stage, they were not highly representative and the zone was practiced by other older reptiles that ended at the end of the Triassic period, some 201 million years ago.

Müller now hopes to continue the fieldwork and continue the expeditions to find more complete material and to form the puzzle of the dinosaur’s ancestors.