Military secrets, 70 witnesses and contradictions: why in the case of the San Juan ARA there is no charge 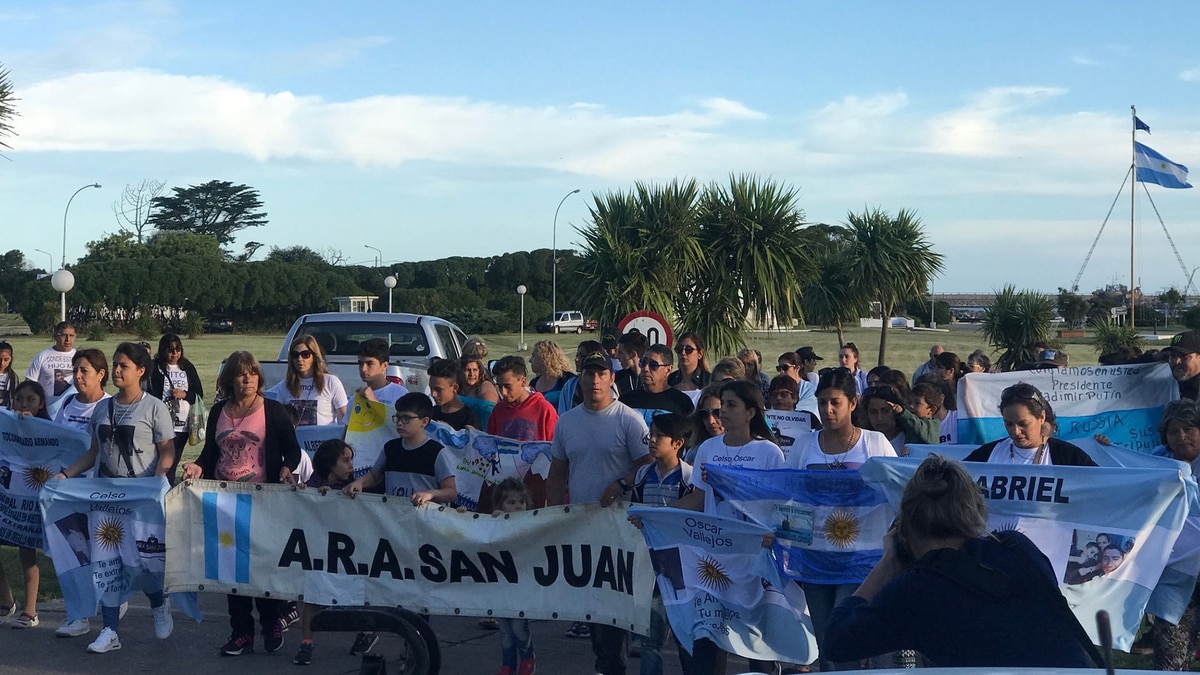 For office and federal judge of Caleta Olivia, Marta Yañez, they spend more than more than 70 witnesses. Among them the Defense Minister, Oscar Aguad and the head of the Argentine Navy when contact with the submarine was lost, Admiral Marcelo Srur. The first is still responsible; the second went to retirement.

The vast majority of these witnesses are soldiers receiving their wages from the Navy, that is, by the Ministry of Defense. Or in other words, both official bodies were investigated for the disappearance of the war on November 15, 2017.

Some of them contradicted themselves when they appeared before the Parliamentary Ficameral Commission who should investigate political responsibilities The greatest Navy disaster during a period of peace.

"Within a year, the case is still described as & Crime investigation This is very serious because it means that the judge did not even move on if a crime had occurred or not. This is also very serious because I understand that there are many tests that allow us to predict that in the disappearance of ARA San Juan was a crime. Later, in the trial, the responsibilities are seen, but here there was a slaughter of 44 people ", reasons Luis Tagliapietra, lawyer and father Alejandro, one of the missing crew officers, and the head of one of the three legal cases.

"It will be necessary to explain whether the killing was illegal or fraudulent, or ultimately misconduct, and we must move forward with the statements and the queries that the judge did not take. the responsible ones had detailed information about the state where the submarine was, of the missing ship. Back admirals and ship chairs, who are responsible for the area of ​​the submarine, with their experience, they should have represented the possibility of sending them to death, "he said.

Her loud and tough voice words are angry. He does not sit in his law office, but on board the North American company ship Ocean Infinity what For 50 days, he has unsuccessfully searched for the submarine that has drowned in the Argentine sea area.

"We must award the former head of the Navy"

"In July 2018, I am already of the opinion that there are many elements to be able to commute for homicide crime repeatedly on 44 occasions with fraud back to the New Navy, Admiral at that time Marcelo Srur, i and captain Claudio Villamide, who was responsible for the Submarine Police (COFS), and the Rear Admiral Luis Enrique López Mazzeo, head of the Training and Enrollment Order (COAA), "he said strictly Valeria Carreras, another representative of the complaints.

The lawyer, also in dialogue with Infobae, he gives details of the assumption of evidence that it is believed to have accumulated in Judge Yañez's file: "Probably, these offices only occupy a place in their office his office because with them he does not do anything, the magistrate may have political commitments that we do not know, "he said. .

Carreras explains that next to her pair Fernando Burlando They deferred the application for believing because "new evidence seems to be directly related to other responsible parties, such as the head of Information and the owner of Arsenals, among others," comes to the conclusion family attorney.

"The judge does not investigate political responsibilities"

"In a year, a number of testimonials were accumulated, a hundred percent of the Argentine Navy, but no progress was made most importantly: to know the truth. No official skills were made, such as matching. "

The opinion goes back to Tagliapietra, who today will not be present at the Mar del Plata Death Base where the act of tribute and difference will be held to 44 crew members of the ship because he is on board .

"In this case, so far, the judge did not dare to investigate political responsibilities. It is impossible for the Minister of Defense to say, I did not know, because on January 5, 2017, the report of the General Navy Inspectorate was where they were described at her office. all the problems that the underwater vessel had to do and perform information about the British Navy's foreign fishing vessels and warships, as is apparent from the last operations order. If this was not communicated by the Minister to the President –Mauricio Macri– Political responsibility will end there, but Aguad can not say "I do not know," he said.

– The relatives who act as supervisors on board the Seabed Constructor Park, will perform a minute of silence as a proposal to the 44 crew members?, he does not ask Infobae i Tagliapietra.

-File, yes. But We will not make a minute of silence because they are still missing.

This time the answer was not the answer of a plaintiff lawyer, but a father's father who fights for something so difficult in Argentina: justice.

"They were flying 46 but there were raffts for 40"

Twenty months after the last communication with the crew of the only submarine operated by the country, the magistrate and special commission of the Ministry of Defense – was responsible for investigating the details of the shipbirth – appeared to the incredible theory that is it is only due to some alleged human error that could only be achieved by any of the 44 crew members in the ship, including his captain Pedro Martín Fernández.

"There is no evidence that the crew of the San Juan ARA has achieved any operational error or organizational error as everything says they had responded to how they were trained and ordered, "he said. Infobae and captain overseas Marcelo Covelli, an advisor to one of the Complaints and the Parliamentary Ficameral Commission.
The expert is powerful in his analysis of the case and the "blink" and "dead" intentions that are always easier ".

And it lists the submarine's shortcomings:

"When the San Juan ARA arrived with 46 crew of Mar del Plata, and 44 crew of the Ushuaia port, Their life raffts had plenty to 40 people, not because they're doing error & # 39; when counting the endowment but because they were so ordered. "

"When they went with just 1 of 2 radio bikes they did not have to have it because they made an error & # 39; counting them but because this is the amount provided. "

Covelli tells each question with the only possible reasoning, whatever you say, the captain of the submarine follow up orders.

"In this sense," said the equestrian expert, "the list continues with seamless differences between what should be and what was really. the way in which the valves and ventilation system are operated (the ECO 19 famous among others) with full information and compliance, for example, the Lord Tanforfor (COFS) Order and the Management and Enrollment Order (COAA), "he said.

Both were justice and in the draft that was dropped by the Ministry of Defense Investigation Committee, and agreed on Infobae, that is said the disaster started because a "white valve" for the arc batteries – from the ECO name 19 – was open, The sea ​​water that fell on the recorded batteries, this caused an electric arc that ended to create the "implosion" that sink the submarine.

Although the details are very technical, it's worth explaining that the ECO 19 valve connects to the Snorkel a During the navigation you must always close it for security reasons. According to the Ministry of Defense researchers, this would not have happened because, as happened in the previous steering, the ship captain would have opened the ECO 19 to improve ventilation of the submarine. The chiefs were informed of opening the valve, as he was the same captain who wrote him in a report – where the movement was being advised on ventilation, and no one ordered him to do the opposite nor did he exclude him. In fact, the head explained that he was opening an ECO 19 as a way to make the pillow last longer to clean the air.

At this point, Covelli explains: "The San Juan ARA crew did not commit any action error or organizational error. All they did was that that was the way they were supposed to act because of a lack of response to the news reported by the order and that their leaders did not go to that. What's New? The lack of replacement of the finished soda lime tablets, their intention to use and extend the products of these finished products and oxygen production candles, even give the security of the ship and residents at risk. "

– But from the Navy and the Ministry of Defense, it is clear that responsibility for the disaster lies with the head or part of the crew.warns Infobae i Covelli.

-I would be frightening and unjust for me, as well as be friendly, if it would hide or help to cover those who are really convinced . And also if I did not object to the report that overwhelmed the Special Commission and alleged that there were alleged action errors or procedures, referring to protocols that were not just those that the crew had orders or possibilities to & # 39; w follow.

"Aguad was aware of everything"

"We all know that, in this country, when you're putting someone in prison, they're beginning to talk, today the people with care do not speak because of their be comfortable in their homes and that is very serious, and it shows the judge's shortcomings, "said Tagliapietra

-A & Ministry of Defense?

-With did everything from her place. Possibly due to an ignorance of what he / she must administer. But also throughout the year, it showed negligence. He was obviously hiding information to us, he told us. So, ask for your political opinion that is more than justified.

The solicitor Carrera insists: "The worst baradard would be the fault of members of the crew." In a terrible paragraph in the statement of evidence brought by Judge Yañez from Srur, he said that the one of the San Juan ARA was one: & Inexperienced crew & # 39;. How does that and go to say that the Chief Navy? How did the judge say that without a cross examination? That is why, as a plaintiff, I refuse to accept that Srur, who should already be accused, should declare herself as a witness. "

Today, a year after the disaster, in the case that investigates the painful loss of 44 soldiers in the middle of a mission of a "secret" and "secret" nature, there are more doubts or assurances. There are more lying or truths. All tears and no response.