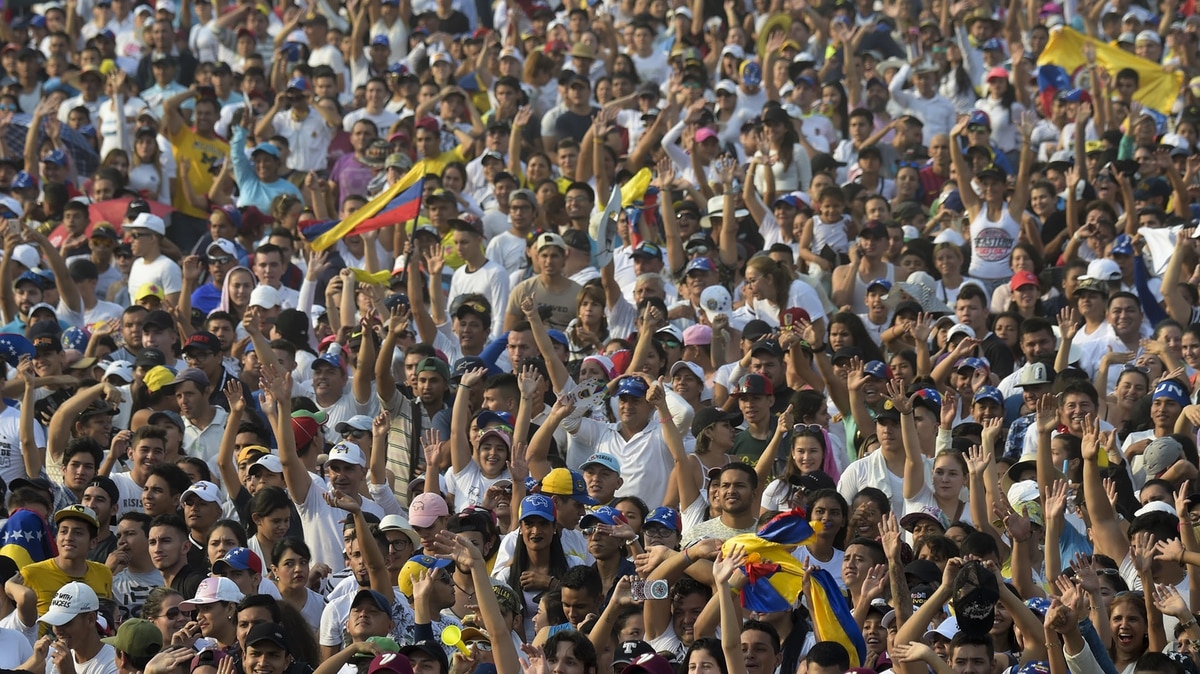 From early morning, Thousands of people started to go to Tienditas bridge, in Cúcuta, to attend the mega concert Venezuela Aid Live, where more than 30 artists will sing to ask for humanitarian aid to enter the oil country.

With the platform already, hotel accommodation is 100% and the artists are ready, Colombia or Cúcuta city receives more than 250,000 people in an event that seeks to stimulate resources for the Caribbean country.

(Thousands of people arrived at the border at an early age)

11:50: Minutes before noon, this was the Venezuelan singer Danny Ocean. "How nice when we all work as a team! This is the first time I've been so close to Venezuela," he said.

11:45: Jencarlos Canela He appeared on stage and took the opportunity to ask for peace in Venezuela. The actor and American musician, from the Cuban origin, asked for freedom in the Caribbean country. "May God bless my people"He also mentioned the actress and the old beautiful queen, Monica Spear, murdered in 2014 in Venezuela.

11:40: In a video, the organizers remembered the hard time of Venezuela passing by and asked to donate: "With your help, we will save millions of lives"says the message.

11:30: that was to turn lane music in due course Reynaldo Armas, Jorge Glem a Cholo Valderrama.

11:20: appear on stage José Luis "El Puma" Rodríguez. "Thank the colloquial and dear column of Colombia and the United States for the help and solidarity they have received to us," said the artist.

"Enough sentences in Latin America. Thanks, the President of Guaidó, thanks to the National Assembly and thanks to opposition politicians, "he said.

"For the soldiers I say: They are our brothers. Do not shoot the people because this will happen and we will reconcile & # 39;", finished before singing to hit" Hold hands ".

11:10: Richard Branson He gave a speech where he thanked everyone who was present and the artists who joined the call. "There is a need to change now"question the event promoter and the people were fascinated.

"I am very grateful because they are coming to Cúcuta. If we can take people to space, why is it so difficult to get our brothers out of poverty?"he said.

"Babies die, children are hungry and the elderly can not get the medications they need, and every day it gets worse. The richest country in Latin America is now the poorest. This is unacceptable"he added.

11:05: Reymar Perdomo The concert opened with the song "Fe es i" song.

11:00 AM: the megaconcert started with anthem or Venezuela. The people, excited, sang the verses of the country song. Then the anthem Colombia was heard.

10:45: the deputy Tomás Guanipa according to the Justice Palace, where it was transferred Juan Requesens a few hours ago: "Venezuelan people have been kidnapped by Nicolás Maduro. Everything that happens today and tomorrow in Venezuela will be news in the world, "he said.

10:40: Juan Guaidó expressed his death condemnation on Twitter in the hands of Chavez's oppression. "In the community of Kumarakapay, two soldiers of fire broke out in Pembrokeshire at the guardian's management office. Result of this offense: 12 people and 1 deceased were injured. We are united with them. It will not end up. "

"M / G Jesus Mantilla Oliveros, G / D Alberto Mirtiliano Bermudez: or the capture and presentation of those responsible for the collision and murder of the Pemón brothers in Kumarakapay that supports humanitarian aid, or you you are responsible, "he added.

And it ended: "Decide which side you are in this last hour.
All of the military: between today and today you will define how you want to be remembered. We already know that they are with the people, which you have made us very clear. Yfory you can prove that. "

10:20: Argentina Diego Torres He spoke before Venezuela Aid Live: "We want to help the people that need it"We will sing without any political banner, respecting the political and social situation that Venezuela is passing, but with humanitarian aid that it has to reach the people who need it," explained the Argentine musician to Teleshow during work. o Our 2019 Awards in Miami.

9:53: Juan Guadió He asked the armed forces to be part of the out-of-crisis situation in Venezuela: "As president (E) I call on the FANB and all Venezuelans who are" ready to be part of a crisis response without violence, to put a step like the General @ hugocarvajal4F, there will only be securities and recognition for its future and everyone, "he says in his Twitter account.

9:50: teachers motivate decent salary entitlement. They said that members of the Bolivarian National Reserve were trying to scare them. And channel VPI They are on the highway at the height of Caricuao and try to reach the "Bomb Texaco".

9:35: confirmed At least one dead and 12 are injured about the rebellion of the Nicolás Maduro regime in the Great Sabana. This is this Friday after Army members have been deprived of the San Francisco de Yuruaní community.

9:25: organizers wait for the last people to arrive before starting the mega concert. It is estimated that more people than 250,000 are expected.

9:15: Carlos BauteAfter the press conference, he stayed with a group of journalists: "We want medication, we want food, in Venezuela, inflation is growing 3% a day. They are mad and dead in Venezuela"

"I am eight years without going to Venezuela because of the last time I was there I had a very bad time. Today, I have 200 meters of land and I really want to sing, "he said.

"The highest level becomes richer, I know that the soldiers also have a very bad time, this guy (Maduro) can not stay in power, and many people have already died. We are close to freedom. We hope we feel"he added.

9:13: Sister Juan Requesens, Rafaela Requesens, posted on Twitter that the deputy over Táchira was transferred from the Helicoide to the Palace of Justice.

8:50: According to the journalists, Branson said: "The bridge has been blocked, there are many Venezuelans here. I would like those on the other side of the border to come"

Branson confirmed that he spoke over the phone with Juan Guaidó and had long been worried about a Venezuelan situation. "There is a humanitarian concert. People want freedom and fair elections"he emphasized.

"What would you tell the critics?", a German journalist asked, and when she answered," When you want to do things right, there are always critics. I invite you to come and look at the Venezuelans and see with your own eyes that something is wrong"

8:45: Carlos Baute, at a press conference with Branson: "We're here because tomorrow we will be free"

"Venezuela tomorrow will be free. I would like to thank all of Colombia because it helped us for a long time. We will want this freedom. Long live Venezuela and live in Colombia! ", The singer emphasized.

8:35: Richard BransonAt a press conference, he said: "Thank you all for being here, we will have very good music. It will be a magical day and we will build bridges of hope"

"You need to help all older people who are hungry and have health problems. The concert will be great. I thank the artists here for free. They have not raised anything"he explained.

8:30: The US will hold the Venezuelan Armed Forces responsible if the attempt to give humanitarian aid in Venezuela as a result of a Saturday is "blood blood", and they can respond with sanctions or effects for their relatives abroad if that happens.

"If there is a blood pressure inside Venezuela, the Venezuelan Armed Forces and Cuban guards would have a blame"he told the news agency EFE On Friday, a senior US officer, who asked for anonymous.

"The international community, including the United States, will achieve the results because of those individuals who break human rights to themselves", added the source.

8:15: he arrived Richard Branson to the area where the concert is held.

8:10: official transfer of the Venezuela Aid Live. Thousands of people all over the world follow the concert.

7:40: Russia urged the US and NATO to plan the introduction of weapons to the opposition of Venezuela. "Information about US companies and their NATO allies work on the issue of buying large loads of weapons and bullets in a country in Eastern Europe and then transferred to the opposition forces in Venezuela," he said. 39; r spokesman. Foreign Affairs, María Zajárova, at a press conference.

7:00 pm: the United Nations Refugee Agency (UNHCR) and the International Migration (IOM) Agency provided an assessment of the number of refugees from the Pheninishians: 3.4 million have left their country.

6:30: China believes that access to Venezuela can create "conflicts". "The introduction of the mandatory humanitarian aid could lead to conflicts and cause serious consequences, and no-one wants to see that," said the Geng Shuang Chinese Foreign Ministry spokesperson at the daily press conference.

6:15: Japan reiterated his support to Juan Guaidó and said he will give the best to work with Nicolás Maduro. "As far as Japan has already expressed its support for Interim Guaidó President, he will no longer work with the Maduro President," said Japanese Foreign Minister Taro Kono.

6:00 pm: Thousands of people carry the Tienditas bridge, in Cúcuta, to witness the concert.

(Here is how Venezuela Aid Live's scenario was created)

There will be a total of 32 artists from Argentina, Colombia, Spain, the United States, Mexico, Puerto Rico, Sweden and Venezuela who will be taking part in the concert that aims to raise up to 100 million dollars in 60 days.

On the bridge, one of three Cúcuta boundaries crosses with Venezuela and where there are about 600 tonnes of humanitarian aid that will be taken to that country on Saturday, has installed in about 58 hours a platform of 16 meters wide, 12 meters deep and 3.5 meters at its highest.

In this venture, organized by the billionaire Richard Branson, artists such as the Colombians Juanes and Carlos Vives will be involved; and Ricardo Montaner Venezuelan, and Dominican Juan Luis Guerra, Spanish Spanish Miguel Bosé and Alejandro Sanz, who were also 11 years ago at the "Unlimited Peace" event.

That concert, held on March 16, 2008 on the Colombian-Venezuelan border, took place on the route between Cúcuta and San Antonio del Táchira, to restore the brotherhood of both countries and fight for peace the coffee nation.