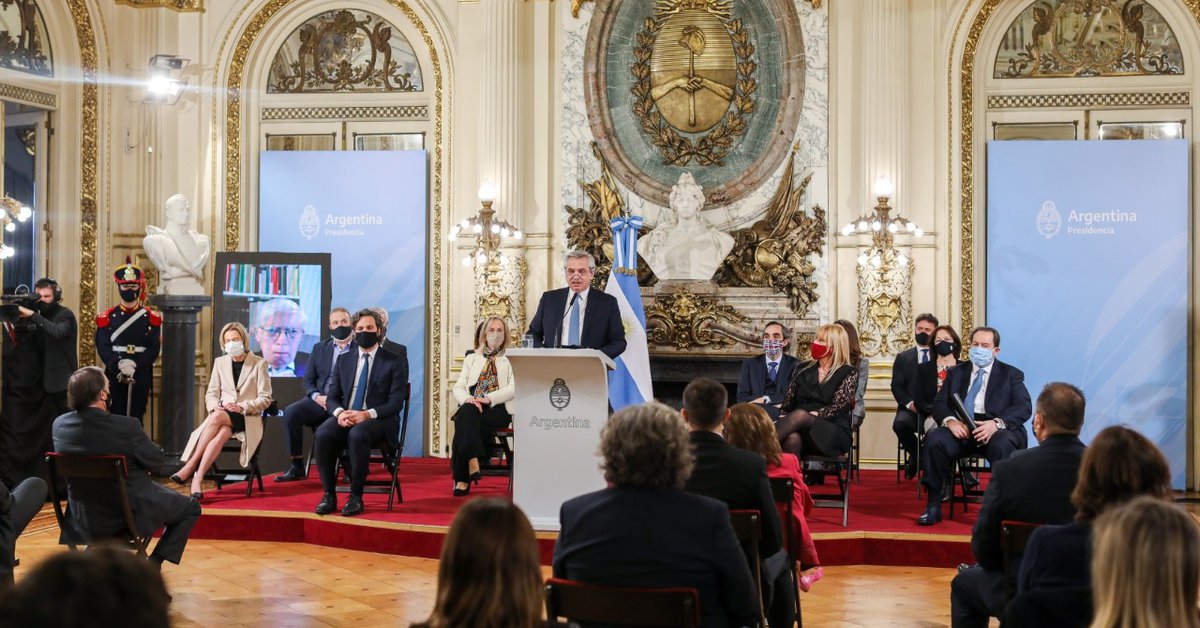 In the midst of criticism of the ruling Party of Justice, as a result of the highest court’s confirmation of the former vice president’s conviction Boudou dear over the cause of Ciccone, the president Alberto Fernandez decided to assemble for this Thursday the commission of jurors who formulated a series of suggestions to reform the Supreme Court, Public Ministry and Magistrates’ Council. That day he will fulfill a year of mandate, when he promised in Congress “never again” to judicial activists, unclear procedures and “media lynchings.”

It’s going to be a hot Thursday. While Congress is debating the abortion law, The head of state summoned the eleven judges, academics and lawyers at 10 am to explain the proposals they made when he summoned them, the day he announced his judicial reform project. It has not yet been set up, but the meeting would be at the Casa Rosada, to which they indicated Infobae sources consulted.

At that time, they will formally hand over the work that the directors completed on November 18, where they recommended the creation and the Supreme Court filtering court, shortening the terms of the chief prosecutor’s office and electing him by a larger majority in Parliament and restructuring at the Magistrates’ Council, the body that selects and controls the judges. These were just some of the suggestions made to him along with others on how the jury trial should be implemented at the national level and the transfer of the national criminal justice orbit into the jurisdiction of Buenos Aires. Although there were some councilors who wanted to include it, the commission decided not to discuss expanding the number of members of the Supreme Court, one of the doubts raised by the opposition when this council was created.

Like last time, when the creation of this council was announced, Bacigalupo will follow the meeting by zooming in, citing the sources consulted Infobae. Just as the negotiations were held for three months. This will be the first time that commission members have officially met again since July 29 at the Casa Rosada, when Elena Highton of Nolasco he contacted himself, as the only member of the Supreme Court, to participate in the official act.

Exactly, the Supreme Court was the major absence in the debate the commission gave. The rest of the organizations marched for “adjustment” with their representatives, along with experts who gave their views on the proposals being discussed. But the political noise in the Government and the Supreme Court due to the controversy over the judges’ transfers ceased by the dynamics of sending the inviting invitations to the ruling party, in vain, until the last moment.

This is when the Supreme Court decided to accept the the saltum that the judges had asked Leopoldo Bruglia, Pablo Bertuzzi and Germán Castelli against the decision of the Magistrates’ Council, at the request of the Executive’s representative, to order a review of their transfers, signed in government Mauricio Macri. Parliament executed the summons and decided to remove them from those positions when they did not appear at the public hearing, when their cases had already been prosecuted.

But the Supreme Court decided to overrule the Magistrate’s decision and blow up the entire transfer mechanism: he said the only way to consider a judge in a situation was if they had won a Magistrate contest, chosen by the president and voted in the Parliament. And he ordered Bruglia and Bertuzzi to remain in the Federal Chamber while Congress opened a contest in which they could participate.

Now, Alberto Fernández’s decision to summon members of the advisory council next Thursday comes within the framework of another debate with the Court. On Thursday, the highest court upheld the sentence of five years and ten months in the prison of Amado Boudou, former vice president Cristina Kirchner, for crimes of negotiation incompatible with public function and passive bribery (collecting bribes) for a “Ciccone scandal”.

The case began in 2012, when Boudou held the position that Cristina Kirchner holds today. The Supreme Court signed the sentence with the famous “280”, an appeal allowing the highest court to dismiss a claim without controversy; exactly, one of the focus that Alberto Fernández criticizes and that the commission of jurors is paying attention to.

In arresting a house since last April, Boudou’s response was to make sure that his sentence is actually CFK and question the government. “No legal haircut has been resolved on Cristina,” she said and confirmed that “in the event of what eventually appears in the newspapers,” in light of the versions of her verdict, “someone could have come when we saw the result of the jurors’ commission “which had” a very washed out result “and” does not touch on central issues of law “. “Attached to this we saw that a resolution of the notebook issue was pending. And the result of the notebook issue was the worst, because they validated everything that had been going on. The actions are then validated due to inaction on the other side, ”he added, referring to the Government.

While Kirchnerism criticized the ruling and the Chief of Staff Café Santiago hours later he joined firing at Court, news of the Head of State’s summons to members of the Advisory Council was known. Alberto Fernández will listen to the motions prepared by his chosen jurors. He had already said in an interview that he wanted to talk to them about the work they had done. It will then be up to you to see how you translate any of the suggestions you have been raised into bills.